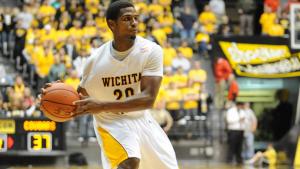 Senior Ben Smith traded his Wichita State basketball uniform and Nike sneakers for slacks and a necktie when he walked into a third grade classroom as “Mr. Smith” at OK Elementary School this fall.

As part of his elementary education degree program, Smith taught six lessons to grade school students at the school located on Wichita’s west side. He prepared and gave lessons in reading and social studies between the Shockers’ basketball practices, games and his own college coursework.

The forward from Oklahoma City has already improved upon his 2010-11 stats, and entered Missouri Valley Conference play averaging 10.9 points, three rebounds and just under 23 minutes per game, while shooting 48 percent overall and 46 percent from the three-point line. He set a new career high against Chicago State Dec. 14 with a game-high 22 points. He earned a starting spot and tied for a game-high 16 points against Newman University Dec. 19.

On the court, he’s continuing a family college basketball tradition. His mother played basketball at the University of Texas at Arlington and his father at Rose Hill College. Away from the court, Smith is following in the footsteps of his grandmother, a former teacher, and his mother, a director of a Head Start program, in his pursuit of a future career in education.

“I picked my major because I love children and I always want to inspire them to be great students and pursue whatever they want to do,” Smith said. “I just was always around kids and hoped they look up to me when I got older, so I always hope to carry myself well. I hope to play basketball, but if not, I would love to be a teacher.”

Smith transferred to Wichita State after a two-year career at Northern Oklahoma College at Enid. He left the junior college program as the school’s all-time leading scorer and rebounder with more than 1,300 career points and 725 rebounds.

During his first season at Wichita State, Smith averaged 6.7 points and 2.2 rebounds in 16.5 minutes per game as a junior. More than 40 percent of the shots he made were from three-point range. Smith claimed the MVC’s Sixth Man of the Year Award, was named captain of the MVC All-Bench Team and earned the Shockers’ Shafer Dart Most Inspirational Player team award. The Shockers went on to win a school-record 29 games and the program’s first National Invitation Tournament championship.

“Ben is a tremendous student-athlete,” said Wichita State head coach Gregg Marshall. “He is very coachable and extremely conscientious as a student. He rebounds the ball well for his height and can drill the open three! Ben is easy to get along with and a pleasure to have in your program.”

Growing up, baseball was actually Smith’s sport. He started playing when he was six. He started with organized basketball in eighth grade, but it played second fiddle to baseball until Smith’s sophomore year of high school at Oklahoma City Southeast. That season, his high school basketball team advanced to the state championship game. In fact, Southeast advanced to the state tournament each of Smith’s four high school seasons and to the championship game twice, where the team took second place both times.

He’s listed as a forward now, but played as both a post and guard on the basketball court throughout his career.

“I do love shooting, but enjoy anything. I just like winning,” Smith said. “Whatever the coach feels comfortable with me playing at that point in time, it doesn’t matter. I’ll do it.”

Away from basketball and school, Smith enjoys going to movies, playing the board game Monopoly, bowling with former Shocker Graham Hatch and playing video games on Xbox. He doesn’t listen to a lot of music, but when he does, he often times picks country first, followed by gospel and some rap. What station is his radio often tuned to this time of year?

He grew up with four sisters — two older and two younger.

“But I’m not quiet at all,” he said. “I love talking. I talk a lot. I can talk to a crowd. I can talk any time. That’s why I became a teacher too. I like talking, inspiring people I guess.”

The classroom provides a prime opportunity for Smith to do just that.

The OK Elementary students he taught about continents, oceans, how to infer and how to compare and contrast know he plays basketball for Wichita State. They watch his games and see him on TV.

“They always talk about it,” Smith said. “The first time I ever did a lesson, they were like, ‘are you going to do a basketball lesson?’ and I’m like, ‘no, I can’t teach you basketball.’ So, it was a funny time.”

On the basketball court, the Shockers play their first home game of the conference season tonight against Creighton. Off the court, Smith expects to graduate in December 2012 and has more student teaching ahead.

He hopes to inspire either way, by leading by example on and off the basketball court — and also in the classroom as a teacher.

“My favorite part about teaching is just being around the kids; just knowing they look up to you and you can inspire them to be great,” Smith said. “Knowing when I teach them a lesson, then the next day they still know about the lesson and they tell you about the lesson. You know that you taught them and they learned something. That’s like my favorite part, when they learn something and they really enjoy it. I can’t even explain how it feels. It’s just great.”