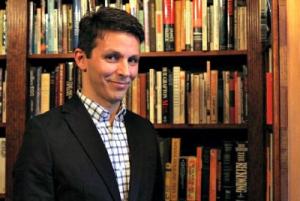 When pre-K, special education teacher Alexandre Lopes stood on stage at the 2013 Florida Department of Education/Macy’s Teacher of the Year Award ceremony in Orlando the evening of July 12, he fully expected to hear the name of one the other four Teacher of the Year finalists announced as the winner.

Alexandre Lopes, the Florida and Miami-Dade County Teacher of the Year, will next compete for the national title.

When the envelope was read, though, he got the surprise of a lifetime. He’d won. (The Florida Teacher of Year is selected from a pool of some 180,000 candidates.)

“I just went speechless,” Lopes said. “I startle easily, so I see all this confetti fall – I almost fell back. It was overwhelming. I remember seeing my dad in the audience and seeing my principal. I was shaking and crying. I thought of my kids and did what I do best and just was myself.”

Lopes, 43, a special education doctoral student at FIU, was recognized for his work at Carol City Elementary, which last spring earned him Miami-Dade Teacher of the Year honors. At Carol City, Lopes teaches children ages 3-5 in an inclusive setting as part of Learning Experience: Alternative Program. Some of his kids are typically developing students and some are autistic. He credits a holistic approach to teaching as the reason he is able to reach all of his students and uses singing and dancing as two powerful tools to aid him in his tasks. Making learning fun, he says, is a commonality all of his students understand.

“The theme of tonight’s competition was ‘Magic!’ and Alex was definitely a step ahead,” said Alberto M. Carvalho, the superintendent of Miami-Dade County Public Schools. “He performs magic in his classroom every day, sharing his wonderful skills with children with challenges, who benefit from the magic he brings to them.”

In addition to the “amazing” award, which carries a $10,000 prize from the Macy’s Foundation and includes a trip to New York for the Macy’s Thanksgiving Day Parade, Lopes also was named the Christa McAuliffe Ambassador for Education at the ceremony. In that role, he will spend the next year serving as a goodwill representative for the Department of Education and teachers throughout the state.

“I’m excited, I’m proud and I’m scared because this is a big responsibility,” he said. “I’m sad, too, because I’m not going to be in the classroom this fall. I will be traveling the state trying to inspire others to love education as much as I do. But I am eager to do this.”

“This is a wonderful accomplishment for Alexandre,” said Delia Garcia, dean of the College of Education at FIU. “He’s an inspiration for all future educators and just the nicest, most sweet-natured man. He is a testament to the work that we are doing at FIU preparing teachers who are also leaders of our community.

“I’m very proud of him. All of us at the College of Education are proud.”

For Lopes, teaching is not just about being current with research and best practices but also about having the right kind of personality to reach every one of his kids at Carol City Elementary. Photo: Carla Guarilha.

Up next, the Brazilian-born educator will compete for the national title, but in the meantime, he will enjoy the rest of the summer and thank that little voice inside that never let go of his dream to become a teacher.

“I always wanted to be a teacher, but back in Brazil I was discouraged from it and encouraged to pursue a career that would make me rich,” Lopes said, remembering previous jobs in the airline industry, which include a period as a flight attendant after relocating to the United States when he was 26.

“It was really great, but after a while it wasn’t enough. I wanted to do something that was more emotionally rewarding,” he said. “For me, that’s teaching.”

It was a leave of absence provided by one his airline employers after 9/11 that put him on a path toward the classroom.

“United offered us a full-benefits, unsalaried leave, which I took to go get a master’s focusing on early childhood intervention,” he said. “I fell in love with it and decided to keep going and pursue my Ed.D. at FIU. Education is my calling.”

Lopes expects to receive his doctorate at the end of 2014 or early 2015, “if everything goes according to plan.”