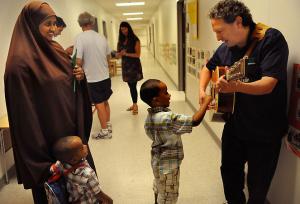 Parenting is tough. This St. Paul teacher made it easier. Now he’s retiring.

He gets guys to croon “Itsy Bitsy Spider,” moms to open up about hormonal rollercoasters and kids to put away their toys.

He started a support group of sorts for stay-at-home dads, a rock band that sings about the twists-and-turns of parenting — and a backlash against lavish kid birthday parties that went international.

This week, Todd Kolod wrapped up a career of nearly three decades in St. Paul’s early childhood and family education program. The soft-spoken, self-effacing 56-year-old is a bona fide celebrity among the program’s graduates.

He’s known for his guitar, the pioneering dads-only classes he launched at the Rondo Education Center and his frankness. That extends to his own turbulent childhood, which has fueled his on-the-job longevity.

“The most significant thing Todd does is provide candor,” said Geoff Haas, who credits Kolod with helping him embrace a new identity as a stay-at-home father. “The job of parenting is hard, and it doesn’t always go perfectly.”

One morning this week, Kolod serenaded parents and toddlers with his guitar as they trickled in for an early morning Rondo class and settled into a circle. Then, he led them in a rendition of “Over the Rainbow.” On his wall was an all-time favorite playlist mixing “Twinkle, Twinkle” and Bob Dylan.

The whiteboard featured an obituary for classroom guinea pig Ethel and a plea to nurse its heartbroken pal Bertha with extra helpings of parsley. Tending to the classroom menagerie of guinea pigs, Russian tortoises and fish has eased separation anxiety for many of Kolod’s students.

Parents say Kolod has a knack for setting both grownups and kids at ease. With adults, it helps that he’s the first to fess up to parenting slipups and anxieties; he often says he got a “do-over” with his younger son, now 15.

“Nobody wants to hear about how you have the perfect child,” Kolod said. “That only makes them want to punch you.”

He proceeds to encourage fellow parents to learn to say no, stop fretting over fussy eaters and take their kids on little adventures, such as the flashlight-lit pajama walks around the block that one of his dads swears by.

As the rare male teacher in early childhood programs, Kolod says, he’s had to work extra hard to win over youngsters and melt separation anxiety.

A big believer in home visits, Kolod once crouched on Chrissy Snider’s floor and played with her child’s toys, which would soon come to include a toy guitar for playing Kolod’s songs at home.

Kids in his classes have brought home cassette tapes with songs featuring their names in the lyrics. They’ve found messages on their home answering machines: “This is Teacher Todd. I can’t wait to see you on Monday.”

“I’ve never met a teacher who is so good with both parents and kids,” Snider said. “He truly is a peacemaker.”

In the late 1990s, Kolod set out to get dads more involved with the ECFE program. First, at the now-defunct Frogtown site, he launched a class especially for fathers who had lost custody of their children. The weekly “outings and adventures” Kolod organized were for many of them the only time they got to spend with their kids.

When he moved to Rondo in 1999, he reshaped the weekly open gym night for dads into more of a traditional parenting class.

“He was definitely a pioneer in that area,” said Bill Doherty, a family social science professor at the University of Minnesota. “Parent education at the time was mostly mother education.”

Kolod says painful memories from his childhood have long guided that work. It’s a story he often shares with parents: His parents divorced when he was 11, and his mom revealed his biological dad had drowned when Kolod was 3. In the following years, marred by homelessness and his mom’s descent into drug abuse, he yearned to learn more about the father he had lost.

“What motivates me is my own lack of a father growing up, my hunger for a father figure,” he said. “It’s no coincidence I work with 3-year-olds.”

Dads say Kolod’s classes create a rare safe haven to talk anything from diaper changes to relationship issues to the lingering bias stay-at-home dads face — but not before warming up with some songs.

“I don’t call up my buddies and talk to them about parenting issues I’m having,” said Paul Archambeau, who dubs the classes “dad therapy.” “But we all know we can speak freely in class.”

In 2002, Kolod started a band with several dads and a mom from his classes. Called Daddy-Doo, after his younger son’s nickname for him, the group put out five albums with parenting anthems such as “Cool Heads Prevail” and “Six Under Six” before disbanding in 2009.

In 2007, a mother aired her frustration in Kolod’s class with ever fancier birthday parties for kids. He promptly enlisted her and Doherty to start Birthdays Without Pressure, an initiative to advocate a return to simpler, less splashy days.

A website the group created got more than 1 million hits; the Wall Street Journal and USA Today wrote about it, and inquiries came from news outlets in places as far-flung as Australia and the Philippines.

In his retirement, Kolod hopes to find more of those community engagement projects to work on. He also plans to spend more time on an exercise he started with parents in his classes: brainstorming ways to tackle behavior issues at 90-minute coffee sessions.

“Todd has this picture of a larger world we live in,” said Doherty, “and he helps parents make those connections.”