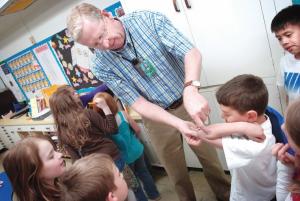 Keith May’s first big lesson as a first-grade teacher came during a Pendleton Round-Up in the 1980s, when he took his class to watch slack on his very first field trip.

“We’re sitting in the south grandstand, somebody ropes a calf, the calf falls, it breaks a leg and the leg is flopping all over. The kids go, ‘Oh, what are they going to do.’ I said, ‘They’re going to go make hamburger,’” May said, chuckling as he recalled the horrified reaction of six of his students. “They had no idea where hamburger came from. So there was a learning curve for me to understand, OK, where are these kids coming from?”

For the past 27 years, May has taught first graders at Sherwood Heights Elementary School in the same room, just down the hall from the building’s main entrance. When he started, he was the only male first-grade teacher in Umatilla County and remains one of just four male elementary school teachers in the Pendleton School District.

This year will be his last teaching, as the 55-year-old is retiring three years early, in part to concentrate on his other major responsibilities: chairing the Facade Committee and serving on the Pendleton City Council. He said he’s taught under every principal at Sherwood, beginning with Joe Daly, the first the school ever had.

May was born in Pendleton but spent his childhood in The Dalles and did several other jobs, including working as a draftsman for Pacific Power before realizing through his work teaching Sunday school that educating children was his true passion.

“There’s no other grade where they grow so much. They give me energy,” May said of teaching first graders. “They’re so excited about learning. They’re just little sponges. They soak everything up. I think I’m terminally six years old myself. It’s just a real connection I have with this age level.”

Early in his career, some parents wondered if a male teacher would be “nurturing” enough to teach young children. Of course, those who know May realize that he is a gentle, sensitive presence.

“Over the years I’ve seen fewer men teaching in elementary,” May said. “I think it’s becoming more and more important (to have male teachers) the more and more homes we have that are single-parent families. A lot of children can go all the way through the grades until they hit middle school without having a male teacher. That can be hard for some kids who haven’t had a male influence at home.”

Michelle Cain was a first grader at Sherwood in 1984 and now teaches third grade there.

While she was not in May’s class that year, she does recall going to his classroom to learn about Japan as a youngster.

“He took a trip there and he completely turned the entire room into a Japanese oasis with bamboo, and we got to dress up in kimonos,” Cain said. “It was a lot of fun.”

Cain said that May has provided the school with a steady, veteran presence.

“He’s one of the most dedicated teachers I’ve ever encountered. He’s not only dedicated to his students but his peers and colleagues. He just goes above and beyond,” Cain said. “He’s someone I know who I can definitely go to for advice. Being a pretty young teacher, he’s had so much experience … he’s always willing to sit down with me and help me come up with ideas.”

May has just a few weeks left until retirement, and leaving the only school he’s ever taught at is painful.

His eyes welled with tears as he contemplated moving on after 27 years, describing the it as a “grieving process.”

“It’s part of my identity, and that’s going to shift and change,” May said. “I went to PERS and I signed papers, then we went over to McDonald’s and cried for half an hour. I can’t imagine doing anything else. When I grow up, I still want to be a first-grade teacher.”