on April 3rd, 2010 Posted By BG in Articles
by Geoff Cunningham Jr. - Fosters.com 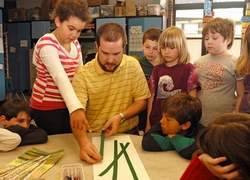 Little Harbour art teacher Andrew French will be the first person to tell you he loves his job, but he is among a minority of men who have been going into a profession dominated by women.

An article by Valora Washington in the New England Board of Higher Education’s magazine suggests the number of male teachers in the United States is at a 40-year low because of issues ranging from fear of abuse allegations to insufficient pay.

Educators are expressing concerns about the trend, which is backed up by National Education Association reports showing that only one in five public school teachers are men, with that number being even more disproportionate (one in nine) for elementary school educators.

An NEA report formulated using survey information from education departments in all 50 states estimates there are 785,151 male teachers in public elementary and secondary schools across the nation, compared to 2.4 million women counterparts.

The report ranked New Hampshire 32nd in its number of male public school teachers, at 23.6 percent, with Maine ranking 14th, with 27 percent.

Washington — president of the Cambridge, Mass.-based Creative Institute for Young Learners — suggests gender stereotypes are still rampant, causing many men to view early education as a profession for women. She said pay also is an issue, noting that “what discourages many potential teachers is the prospect of accumulating tens of thousands of dollars in loans and debt, only to make less than $30,000 a year as a preschool teacher.”

George Shea, the principal at Portsmouth’s New Franklin School, said only three of his elementary school’s 30 educators are men.

“Generally in education, the higher you go up (in grade level), the more males seem to appear,” he said.

He said the lack of male teachers certainly isn’t the product of educational leaders avoiding hiring them. He said they just don’t apply.

“When I look at a stack of applications, only one in 20 is a male,” Shea said.

He said the lack of male teachers for young children serving as models may itself play a role in perpetuating the cycle.

“I don’t stress about it having to happen at each grade level, but it is important for all children to see male figures as teachers and learners,” Shea said.

He put less emphasis on the fear that male teachers will face abuse allegations, saying it has gone down since it “peaked 10 years ago.”

Caroline Butler, principal at Maple Wood Elementary School in Somersworth, said only three of her school’s 22 classroom teachers are men.

“I guess traditionally men have gravitated toward teaching high school, but certainly we love having them. It’s great having both male and female teachers … they bring a great compliment to the staff,” Butler said.

Butler said the lack of male teachers in elementary schools is unfortunate considering the social dynamics of the day.

“I think it’s even more important now to have male teachers because so many children do not have a father at home. They need positive male role models,” she said.

Dover Superintendent John O’Connor said his district has seen an “upturn” in the amount of male teachers over the past few years, but the district’s elementary schools still only have 5 to 10 percent male teachers in classrooms.

He began in education by teaching in elementary schools in Lawrence, Mass., and said he loved the job, but noted a lot has changed over the past 20 years.

He noted salaries in education have lagged behind others, with an entry-level banking position offering 50 or 100 percent higher pay than a starting teaching job.

He said he isn’t particularly worried about the number of men teaching because “good teachers are good teachers” regardless of their gender.

French, 28, is in his second year of teaching art at Little Harbour School in Portsmouth and is one of only two male teachers there, along with longtime physical education teacher Steve Schulten.

French said he doesn’t mind being in the minority.

“In some way it seems we are a novelty. We bring a different perspective, and a lot of the boys in the school need a good male role model in their life, so it’s nice to be there for them,” French said.

He said he’d encourage more males to get into the education field and not have reservations on whether they’ll fit in.

“It depends on the person and in this case the type of guy. … I’ve found something I’ve love, and all the guys I work with in the district absolutely love their jobs. My job is working with kids all day long, and I wouldn’t trade it for the world,” French said.

Washington’s “Needed in School Teaching: A Few Good Men” report suggests steps might need to be taken to boost the number of male teachers, such as offering a “GI Bill for Teaching” that would provide a financial incentive for males to enter early education.

She also suggests having middle and high school male students be encouraged to job shadow teachers to help steer them into a possible career in the classroom.

“It is an unfortunate truth that men commit the majority of violence in our country, often toward each other. Until we demonstrate that men can teach, be productive and help our children succeed, everyone will lose,” Washington wrote.