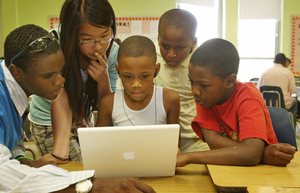 Marquise Cottman knows he wants to become a teacher, but not just anywhere.

His dream is to help students who have to overcome the challenges of growing up in an inner-city neighborhood, like the one he was raised in just blocks from Temple University in North Philadelphia.

Cottman, 17, took his first step on that path this summer, as one of 32 high school juniors taking part in the inaugural Pennsylvania Governor’s School for Urban Teaching, a full-scholarship residential program designed to encourage students to become teachers in city schools.

The “govies,” as they call themselves, helped to run a literacy program for students in third through eighth grades at the Tanner Duckrey School, 1501 W. Diamond St.

Cottman knew he was especially qualified for the role.

“I look at [the students] and I see how I acted when I was a child,” said Cottman, who is entering his senior year at the Philadelphia Military Academy at Elverson. “So I just take them outside and talk to them, calm them down, and bring them back in.”

The $350,000 funding for the five-week program, which ends Saturday, was sponsored by State Rep. James Roebuck (D., Phila.), who chairs the House Education Committee. He wanted to add an urban-education school modeled after the Governor’s School for Teaching at Millersville University to address the “reoccurring problem” of attracting students to teach in cities.

“I think it’s part perception, but there’s certainly an art to being a good urban teacher,” Roebuck said.

It’s an art that fewer and fewer have been attracted to in Philadelphia and other urban centers in Pennsylvania over the last eight to 10 years, said Jerry Jordan, president of the Philadelphia Federation of Teachers. “Even though it may be challenging,” Jordan said, “it really is one of the most rewarding experiences you can have.”

The govies got a small dose of what city teaching could be like. In the morning, they helped teach reading and writing, and at noon, they became the students – listening to lectures from Temple professors on becoming a teacher, and the complexities of school reform and teaching in urban schools.

Along with biweekly speakers and the occasional community-service project on weekends, the program did not leave much time for recreation. “It’s been crazy because we always have a lot of stuff to do,” said Leah Freilich, 17, of the Somerton section of Northeast Philadelphia.

Pennsylvania has nine governor’s schools that cover various topics across the state. There are more than 50 similar programs in as many as 20 states, according to the National Conference of Governor’s Schools.

The first program in Pennsylvania was the Governor’s School for the Arts, created in 1973. The concept had begun 10 years earlier in North Carolina.

The newest Temple program got off to a late start because funding didn’t come through until January. Temple will look to double the number of spots next summer and draw applicants from across the state.

For most of the students, the highlight of their summer here was becoming a role model for the younger students.

During a class last week, Lethaniel Norton, 17, of Strawberry Mansion, circled a desk of fifth-grade students, helping them spell words in a crossword puzzle and promising Jolly Ranchers candy to the one who finished first. If students could identify the picture, but couldn’t spell the word, Norton would answer their requests for help with “Would you like a dictionary?” while toting one under his arm.

The 75 children who came from North Philadelphia schools clung to the govies. As her classmates gathered at the door for a recent art class, one of Norton’s students, Tammy Cole, 10, stayed behind with him and Freilich until they left.

Folding a piece of bright green paper at her desk, Tammy said her favorite part of the class was writing a biography about Freilich, her favorite teacher.

“I wrote all about her life. She likes to ride horses, and she likes to read a lot,” Tammy said. “Also, she doesn’t like to eat onions – like me. They’re nasty.”

The program would like to recruit more minority students from cities so they can better relate to the students, said Heidi Ramirez, director of Temple’s Urban Education Collaborative, who oversees the governor’s school.

While roughly 87 percent of students in the district are minorities, the figure is just 34.4 percent for teachers, according to 2008 district data.

Cottman, who is black, said there needs to be more black male teachers, especially in urban schools. “There’s not that many African American male teachers,” he said. If the students see him teaching, “they may say, ‘I can actually make it out of North Philadelphia.’ ”

Though the teaching at Tanner Duckrey School was in a controlled environment, Ramirez said the govies got an “incredibly authentic experience of urban schools” through the classes and speakers and their interaction with the students and the community.

Jeff Tomczyk, for one, is considering teaching in an urban school now that he has seen the potential to help.

“Being here with these kids, it’s really different than from where I’m from,” said Tomczyk, 17, of Exeter Township outside of Reading. “I think I’m going to be more of an urban schoolteacher now because I want to help these kids . . . get out, get an education, get them to college, get a job, and help them get out of their struggles.”