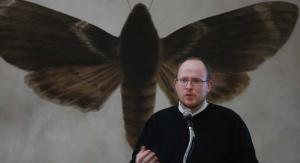 The area of boys’ education always has been of interest to Marcus Weaver-Hightower, a former high school teacher and current UND assistant professor.

Weaver-Hightower, who is in the department of Education Foundation and Research at UND, was able to take that interest and a Fulbright Scholarship and go to Australia to study the process of creating education policy geared toward boys.

He and his wife, Rebecca Weaver-Hightower, moved to Australia for a year so that he could study the culture, the country’s boys’ education policy and the way it was applied in schools.

Marcus Weaver-Hightower is the author of the new book “The Politics in Boys’ Education: Getting Boys ‘Right.'” Herald photo by Eric Hylden.

With that research, Weaver-Hightower wrote “The Politics of Policy in Boys’ Education: Getting Boys ‘Right.’”

“Without that year, this book never would have happened. Really, it was the best year of our lives,” he said. The book is available at Amazon.com, and there are copies for sale at Barnes and Noble in Grand Forks.

The Weaver-Hightowers afterward moved to Grand Forks, where Rebecca Weaver-Hightower was hired as an assistant professor in UND’s English department. She’s also a published author. The two are parents to two children, an infant daughter who died in 2006 and a toddler boy, who now is 18 months old.

Weaver-Hightower tells us a little about how his own high school experience shaped his interest in how boys learn, what policy can do to help in boys’ education and how, now that he has a son to raise, the pressure is on.

“Being an expert on boys, I should be successful right?” he said, with a laugh.

Q. What made you write a book about policy, or lack thereof, of boys’ education?

Originally, the question was how are we going to better educate boys, particularly in literacy skills? I guess the book came about as a slightly different take on that original question. The new question was: How do we actually go about doing this, changing this?

A. Australia had really gone farther than any other country in addressing boys’ issues, doing practice-oriented research to see what was actually going on.

I wanted to see if they are so far ahead in these issues, what can we in the United States do to follow them? The focus of the book is the Australian policy directed toward boys’ education, but there is a concerted effort to compare it to what is in the United States.

We share a pretty firm idea about masculinity and gender: They’ve got the Crocodile Dundee image. We’ve got the John Wayne, Sylvester Stallone images. Both countries have this idea of hyper-masculinity. Both are trying to look backward to define masculinity, and my own take is that’s the wrong direction and we really need to redirect masculinity, especially in culture and an economy that has shifted and made hyper-masculinity more of a burden than it is an asset.

Q. You were a high school teacher and coach, can you tell us if boys learn differently than girls?

A. I think it depends. If we really wanted to generalize, I think there are differences between boys and girls. There are some biological differences, obviously, but we’ve trained boys and girls to be different.

There’s more variability between boys and between girls than there is between the two groups.

I think teachers, and really parents, know this at an intrinsic level. For example, parents might have two sons that are vastly different; then they might have a son and a daughter who are very similar.

Those differences co-exist in the same classroom. It becomes a challenge for teachers and parents, figuring out the real strengths and weaknesses of the individuals they have before them. Rather than trying to mold kids into our own stereotypes, whether they’re quiet and studious or really rambunctious, we need to look at the individual. If we rely on our stereotypes, we’re really going to do it the wrong way.

Q. So, are we getting it right?

A. It’s a complicated question for the United States. Unlike Australia, really, I don’t think there’s a possibility of a nationwide education policy. We have education policy state by state. There are national policies, focused on girls, but on boys? No. To change that at present would be very difficult.

Right now, the state of Maine has made a policymaking process to help educate boys better. Except it’s not just about boys, it is gender focused.

In general, U.S. police are too silent on boys’ issues. I don’t want to at all suggest we need to focus on just boys.

The summary is no, we’re not really getting it right.

A. What comes across to me most strongly, even though it was their intention to broadly define boys, what in fact they found was that the best approach was to look at the students in front of you, and not take that one-size-fits-all approach.

That’s the one take-home point, I think. Whenever we engage in the process to make policies, especially in policies around education, what we’re doing is creating a definition about boys, masculinity and equality. Even about girls and femininity. And we’re making those definitions concrete.

What happens so often is that politics and ideologies come into it, and then, we have a political conservative notion of how we go about raising boys, which is a stereotype of what boys are like and what they should be.

For example, there’s the idea that all teachers should teach boys literacy through phonics. This approach is based on the political ideology and based on the stereotype that this is the way boys learn to read. That’s not always the case.

When we try to make policy based on boys, we don’t really come up with solid, effective results.

Q. So, we’re talking about teaching to the individual. Is that even possible?

A. That’s definitely one of the most common questions in education.

In the past few years, there’s been a lot of good work done across the country and even here at the university to answer the question of how to individualize instruction without driving teachers crazy. Sometimes, the answer is mixing up what you do day to day, so that eventually, every kid is going to have their reading style met. For example, you might teach a sports story one day to get the interest of some of the students and Jane Austen the next to reach others. Not only do you work with students to meet some of their learning styles, but you help them grow into being able to read a variety of things.

I personally think it’s good for boys to read some of that romance-type literature, like Jane Austen. There are things you can learn from Jane Austen to expand your horizons.

Q. What kind of changes do we need?

A. Definitely maintain funding, increase funding for some of the programs, the things that work, like Reading Recovery, tutorial-type programs.

A good policy to enact, for both parents and teachers, is supporting boys a bit more in early reading. Research shows that parent don’t read as much to boys as to girls and that fathers are not seen as readers so much as mothers.

We also know for instance, at the high school level, boys and girls perceive English and literature classes to be feminine subjects. Proof is that in college, 60 to 70 percent of English majors are female. Males tend to shy away from it.

I don’t think that policy can fix it, but policy can do a lot by better supporting boys’ reading. Maybe sponsoring programs that bring a male athlete to school to read to children; it’s certainly not a panacea, but there’s certainly a lot policy can help do.

A. It’s a difficult thing to escape the issue of male teachers. (The solution) is a bit simplistic: get as many male teachers in school as we can. And it’s not just about getting more; it’s about getting the right kind: those who are good role models. Not to say females teachers can’t teach males. They can, and they do.

But, this is a place where policy can do a lot; it can inject more funds into the system to make the job more attractive to males; it can help schools of education attract more male students; it can add maybe a program or support system for males in education programs.

The biggest issue truly is the money issue. Men, and women, too, need more money doing this profession.

Q. Who do you hope reads your book?

A. In my less humble moments, I think everyone should read it. It’s really geared toward other scholars, policymakers and teachers. It’s not a book geared toward parents and the issues they face. There are nuggets of wisdom parents might look to, but generally it’s a book for academics.

Q. Are you planning to write any more books?

A. I am, actually. I started working on my second. But I need a mental break from boys for a while; my preliminary research is in the politics of school lunches. Broadly, it’s about issues of obesity, quality of the food, the social atmosphere for kids in the lunchroom politics of vending machines. Broadly, the politics of school lunches, like ‘Why is that we have lunch ladies and not lunch men?’ See, I get back to the gender issues.

I will come back to the boys issue one day, I’m fairly certain. I do need a break from it for a while though.