on October 27th, 2010 Posted By BG in Articles
by Candice Ruud - The Oregonian 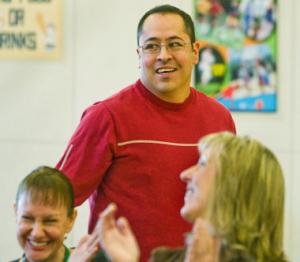 Martin Martinez woke up Wednesday morning and went to his job as a third-grade teacher at Gresham’s Hogan Cedars Elementary School as usual. He knew an assembly would be held at 9 a.m. but knew little beyond that.

He especially had no idea he was about to get a $25,000 award for his dedication and innovations in teaching.

Each year, the Milken Family Foundation presents the award to one, sometimes two unsuspecting educators in every state. Since its inception in 1987, the California-based foundation has given more than $62 million to educators across the nation to recognize their contributions to education. This year, 55 people, both teachers and administrators, will receive the coveted award.

The check that Jane Foley, the foundation’s senior vice president, presented to Martinez is unrestricted and his to keep. After Foley opened the envelope and announced his name, a stunned Martinez joined her in front of an assembly of several hundred students, his colleagues, state Rep. Greg Matthews, Gresham Mayor Shane Bemis, district and state superintendents, and school board members.

“Very humbling”
He gathered his thoughts, then drew from a word many of his peers have used to describe him: humble.

“This is very humbling,” he said. “When you mentioned that a teacher was getting a Milken award, so many faces flashed through my mind. We have so many amazing teachers at this school.”

After the assembly and a reception at the Gresham-Barlow district school, Martinez, 35, went back to the rest of the school day to do what he does best: teach.

A committee appointed in each participating state chooses the recipient based on a list of criteria. They are usually educators in the early to mid stages of their careers who exhibit strong potential for leadership and who get results in the classroom while motivating colleagues and students.

Sandy Duty, a fourth-grade teacher who teaches across the hall from Martinez, played a part in his selection. She has admired his demeanor with students since she first observed him in the classroom two years ago. “What I loved was his style of teaching,” Duty said. “He’s always working with kids one-on-one and looking after their needs. He’s very calm and he uses a lot of visuals, and kids really relate to that.”

“Really, really cares”
Duty and Martinez’s wife, Bridget, also remarked on the relationships he creates with each student.

“He really, really cares about his kids,” Bridget Martinez said. “He comes in on weekends and individualizes his instruction, and he’s a strong male role model for them.”

Back in his classroom after the chaos of the assembly, Martinez was swarmed with hugs and congratulations from students, who were at work creating cut-and-paste posters from Scholastic magazine as part of their “features of nonfiction text” lesson.

The lesson exemplified Martinez’s teaching style: both visual and hands-on. His classroom is filled with color-coded teaching elements — graphs, maps, charts, learning tools, supplies and tools that students can hold and use to bring a lesson to life. His third-grade class works as a system — he begins the year by setting up what’s expected of each student, which encourages them to take responsibility for their learning and behavior.

Martinez has been teaching third grade for five years at Hogan Cedars and loves the age group because it marks a turning point in their development.

“I love their enthusiasm and their love for learning. They’re a little older so we’re able to have more rich discussions, and it’s a steppingstone year — they’re starting to have to be more independent and responsible,” he said. His job, he said, is to help them make that transition.

The information was still too new for Martinez to know what he and his wife would do with the money. The couple met while doing their undergraduate work at Gonzaga University, but they don’t have any kids — yet, Bridget Martinez said.

“It was hard to keep a straight face around him all month when I knew his life was about to change,” said Principal Debra James, one of the few who knew about the tightly guarded secret. “He is beyond outstanding. He has this humble, natural style — he’s great at taking on diverse students and pushing them up to the next level.”