on January 27th, 2010 Posted By BG in Articles
by Jean Bonchak - The News-Herald 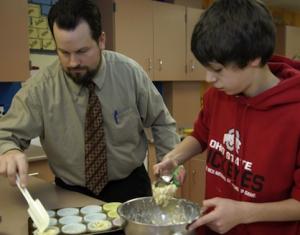 Rows of mini-kitchens and sewing machines line the large life skills lab at West Geauga Middle School in Chester Township, but during class time there’s more than stitching and baking going on.

Dale Smith, who recently received Teacher of the Year honors, blends in math, business, and a smattering of other related lessons while instructing teens how to cook and sew.

The Chardon resident noted that the subject, formerly known as home economics, is not just about cooking anymore.

“The different things they’re learning in other classes are being re-emphasized,” he said.

A measure of science mixed into a muffin baking session last week as a student gently shook an egg separator.

“Let the gravity do the work,” Smith instructed.

The recipient of the annual teacher recognition is nominated and selected by students and parents, Principal Jim Kish said.

“But he would definitely get the nod from me,” Kish said. “Dale is probably one of the most diligent members on our staff. He’s the total picture of what you want as an educator.”

Smith learned how to cook from his mother while growing up in Girard and studied culinary arts at the Trumbull County Joint Vocational School in the early 1990s.

As an elected Future Homemakers of America Hero, he was one of 12 students statewide to run the organization for a year.

Participation in various FHA events brought about an interest in teaching. Eventually, a coupling of the dual interests led him to earn a degree in Family and Consumer Sciences and Vocational Education from Kent State University.

Smith is outgoing and humorous among students and staff, but also serious when it comes to his role as an educator of students whom he maintains are at a “transitional” age.

“You can guide them toward the good aspects and steer them away from the bad things,” he said. “The whole thing is to try to be a positive role model and make it entertaining.”

The muffin-making class conducted by Smith exemplified his signature style — that of delivering clear directives with a light-hearted approach.

“He’s pretty unique, I like his teaching style,” eighth-grade student Ryan Jones said as he tackled the recipe for “Higbee’s Muffins.”

“He makes sense. He makes sure you’re prompt and prepared.”

Smith, who also coaches varsity baseball and seventh-grade football, is intent on sharing life lessons as well as those dealing with scholastics.

Because students often work in teams, he advises them that, “You’re not always going to like everyone you work with, but you have to learn how to work together.”

Admittedly in the minority as a male teacher of the domestic arts, he’s convinced of the importance of the subject matter.

“They may never diagram another sentence in their life after high school, but I guarantee them at some point in their life they’ll have to sew on a button,” he said.