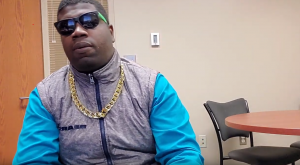 The 21st
Maurice McDavid raps to teach and connect with his students. McDavid is an Assistant Principal at Cortland Elementary School near DeKalb.

McDavid says writing has always been a way for him to express himself, and that he’s been rapping for as long as he can remember. He says he creates raps for his students about everything from proper bus etiquette to knowing when to keep their hands to themselves.

McDavid draws on his experience as an Assistant Pastor at the United Pentecostal Church of DeKalb to help him with his rapping. He says preaching has a similar musicality.

“If you ever get a chance to go on YouTube and google search ‘Pentecostal preaching,’ you’ll find, often times, that there’s a rhythmic element to it,” he says.

“It was the very first time I had seen somebody —a black male — who looked like me standing at the front of the classroom, and I could see myself there for the first time,” he says.

As a black male educator, McDavid says he sometimes bears an extra responsibility to defy stereotypes.

“I also recognize and really relish the opportunity to show children of all colors and backgrounds, this is what a black man looks like,” he says.