on August 18th, 2009 Posted By BG in Articles
by Jenny Rogers - Missourian 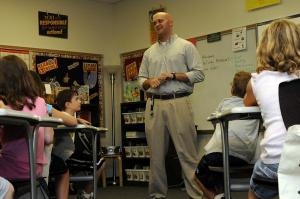 Twenty fourth-graders sit on the edge of their seats, their wide eyes focused on the man in the center of the room.

“Can anyone read my mind?” the man asks. “What else do we need to do when we walk in the hallway?”

“That’s right,” the man says, and writes “Keep hands and feet to yourself” on the dry erase board.

Despite feeling “a little nervous” about the first day, Hutchings is at ease in front of the class.

The class bursts into giggles for the 10th time that morning.

His enthusiasm for football has infiltrated his classroom decoration. In addition to the traditional laminated posters featuring the cursive alphabet and phrases such as “Readers are Leaders,” the room has a prominent green bulletin board covered in paper footballs. A banner above it reads “Mr. Hutchings’ Terrific Teams.”

It’s not the only unique element of this classroom. Hutchings himself is a bit of an anomaly: He is one of just three men teaching at Paxton.

According to the National Education Association, the number of men teaching in elementary schools nationwide has declined steadily since 1981, when male teachers made up 18 percent of the staff. As of 2002, that number had halved to 9 percent. The NEA cites relatively low teacher salaries as a key factor in deterring men from entering the education field, along with the dated idea that teaching is “women’s work.”

The Columbia Public Schools’ human resources department keeps statistics on the number of men teaching in the district’s elementary schools but could not be reached.

Sally Widbin, a University of Missouri Fellows Mentor who is assigned to Paxton, finds the trend troubling in light of her perception of male teachers as popular figures in elementary school.

Widbin, who has more than 20 years of teaching experience, isn’t sure why so few men are drawn to teaching in elementary schools. She said she believes men are more likely to gravitate toward secondary school teaching, a belief supported by the NEA research. It suggests that men prefer to “teach the subject” while women prefer to nurture children. Thus, a disproportionate number of male teachers end up teaching a specific subject area in high school.

Hutchings recognizes that male elementary school teachers may be rare, but it’s nothing new to him. Hailing from a long line of educators that include uncles and his father, Hutchings always knew he wanted to teach. A Bristow, Okla., native, Hutchings earned a degree in elementary education in 2006 from the University of Central Oklahoma. He was a long-term substitute teacher for a third-grade class at Russell Boulevard Elementary last year.

He credits the “very welcoming” staff for making his transition to Paxton easier.

“I have people I work with who I can bounce ideas off of,” Hutchings said.

He plans to rely on the experience of his colleagues for, among other things, tips in preparing his class for Missouri’s standardized MAP tests.

Widbin will be mentoring several first year teachers this fall, including Hutchings. She isn’t concerned that he’ll fit in at Paxton or succeed in the classroom.

“He’s very personable,” she said, “Which is key for all teachers.”

“We have strong teams here,” she said. “We all work together and learn from each other.”

One member of that community is fellow fourth-grade teacher Craig Diggs. Like Widbin, he wishes there were more men in his profession. “We’re the biggest minority,” he said.

Diggs found a love of working with kids while coaching his children’s sports teams and has been teaching ever since.

Diggs offered this advice to his new colleague on his first day: “Slow down and breathe.”

Even after 18 years, though, Diggs admits that he gets a bit nervous and excited before the first day of school.

“You’re always new,” she said. “Every year you learn something new.”

Hutchings already seems to be on the right track. He speaks enthusiastically about developing relationships with his students and watching them grow.