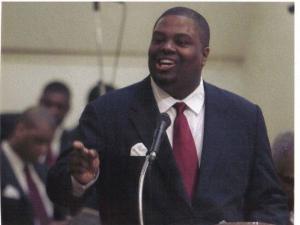 Steven James Harrison, Jr. was an English teacher in the Rochester City School District who gave a large part of his time and resources to students beyond the classroom. On August 4, 2006 Harrison traveled from Rochester to his home in the Bronx along with his brother Marquis to celebrate their mother’s birthday. Sadly, Harrison and Marquis were in a car accident while driving through treacherous weather in Poughkeepsie, New York that resulted in the tragic and untimely death of the beloved teacher. He was 28.

Harrison was one of few Black male teachers at East High School. He had a wealth of knowledge and understanding for the issues impacting the students he served. His strong personality, brutally-honest opinions and comical innuendos (genuinely used when pressing students to be moral and ethical about all things that mattered) registered well with many students that called him brother and mentor.

Harrison served the Rochester community in several capacities. His work as a step coach for the Rochester Step-Off and Educational Foundation was where he invested the most time and energy in an effort to use the creative arts as a tactic to mentor dozens of minority male students. Through this work it was clear that Harrison focused on instilling principles of brotherhood and community service while creatively reinforcing education.

I remember that August morning when I was awaken by a phone call from my high school friend Nicole whose father had a fraternal bond with Harrison: “You’re not about to like what I’m about to tell you,’ said Nicole. “Harrison was in an accident and he died.”

I spent the next ten minutes or more sobbing in disbelief before I called my mother’s work number to tell her the guy I referred to as ‘big brother’ was in a car accident and died. I remember my mother asking me to calm down and telling me that I had to get myself under control. But controlling my emotions at that moment was the hardest thing to do.

My mother encouraged me to reach out to friends to see if any of them would come to the house to spend time with me until she could arrive. I called my pastor and he answered my expected call. Since Harrison was a member of our church his family already made contact with the church to share the news.

Only minutes passed before countless friends started calling for confirmation. They certainly found their answer within the first few seconds of silence. In that same hour my pastor encouraged my friend O’Neil to put his emotions aside and be available to help me deal. It was clear that O’Neil had similar emotions but he understood my relationship with Harrison and did just what my pastor asked of him. Before 3 p.m. my parent’s house was packed with friends, teachers and unknown persons who came by to pay their respects. They brought food, released emotions and reminisced about the days before.

Local news outlets caught wind of the tragedy and were notified that everyone would gather at my parent’s house. The entire Rochester community was informed by 5 p.m

I would spend the next several days being close to the people who shared that unconditional love for Harrison until we all prepared for wake and funeral services held downstate. We would gather at different places throughout the city reminiscing about our favorite teacher. On one occasion I made a joke about how Harrison wasn’t going to be attending my graduation party because he had “other business to attend to”, another comical remark letting me know that he really did had prior engagements. I was a bit pissed off because I selfishly thought he was trying to get out of buying another graduation gift. Harrison reassured me that I would receive both graduation gift and birthday present on my birthday, August 9. Coincidentally, August 9, 2006 was the date of Harrison’s wake.

The Rochester City School District chartered a bus for students and a few of us drove to the city with my pastor to celebrate the life of an amazing fella. Oddly, I spent my seventeenth birthday listening to remarkable stories, greeting the rest of the Harrison family and viewing the body of my big brother. Ten years later I am grateful for that dual graduation-birthday gift Harrison promised me. So much of what I know; a great deal of what I stand for is because I learned from him. He constantly pushed the importance of education, religion, ethics and love for all. His persistence when helping students find solutions to classroom problems or life issues was no secret. His desire to expose students to opportunities outside of the inner-city of Rochester was remarkable. He inspired so many without even trying. His ability to unite students and help them get over high school drama came easy. He taught the importance of African culture without losing touch of the silly issues that divide communities and races. Needless to say Harrison had a tremendous effect on the lives of hundreds of students from East High School. He inspired many of us to serve our communities, care for our youth and to always keep a few jokes in our back pockets. Without question much of what I do is because of what an amazing city school teacher instilled in me beyond classroom instructional time.