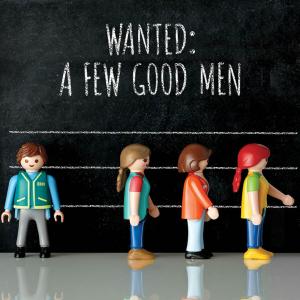 My daughter Avery’s grade five teacher is a bit of an anomaly. Students build different models of paper airplanes to test hang time during the unit on aerodynamics. The kids help choose and order school supplies as an exercise in budgeting and mathematics. And, when learning about democracy in social studies, they put the concept into practice by signing petitions (most recently, to bring back dodge ball in gym class).

Her teacher is young and energetic, and relates well to the kids in the split five-six class at Colonel Walker, a Calgary public elementary school. What makes Jordan Neiger a rarity, however, isn’t the lesson plan or a passion for teaching—it’s his gender. Neiger is the only full-time male teacher at Avery’s school.

Only 16 percent of elementary school teachers (kindergarten through grade six) with the Calgary Board of Education are men. Across the country, the gender gap is just as great: The most recent Statistics Canada data from the 2011 National Household Survey found the same percentage—16 percent—of teachers at the elementary level are men. What’s more, that percentage has been falling slowly but surely for decades. The 1991 census showed that 17.3 percent of elementary teachers were male; by 2006, that number had decreased to 16.4. And Canada is not alone in this trend—in Australia, New Zealand, the United Kingdom and the United States, men are under-represented in primary education teaching positions.

This dearth of male teachers has policy-makers and educators worried. Schools, they argue, need to provide a variety of perspectives to reflect the diversity of the student population and our wider society.

“It enhances the culture of learning when children see more men or people of different races or cultures teaching,” says Scott Hughes, an assistant professor at Mount Royal University in the faculty of education in Calgary. “We are stepping into a world that is so diverse. If children can see that diversity and live it every day, that contributes to a really healthy and divergent school culture.”

It’s well-documented that diversity enhances creativity, promotes innovation and can even change the that way kids think. And children who are exposed to diversity early on tend to have greater empathy as adults, says Gabrielle Wilcox, an assistant professor of school and applied child psychology at the University of Calgary.

Changing the demographics of the staff room will be a challenge, however. Many men in the profession report that stereotypes persist; teaching, especially in the younger grades, is firmly entrenched as a woman’s job, one that comes with lower pay and status. “It’s immensely valued in our society, but it’s not compensated accordingly,” says Hughes.

It’s not just a wage issue—the percentage of male teachers in junior high and high school is larger, likely because those positions are seen as less nurturing. “Man as ‘caregiver’ is still a role that is a bit uncomfortable in our social perceptions. This is, of course, related to a historic stereotyping of gender roles that still shapes contemporary views of men and women,” says Hughes. “However, I believe these views are changing, in part due to the courageous work of men and women who step outside of traditional roles.” Before he moved into teacher education, Hughes spent many years instructing kindergarten to grade two. “I was very aware that in entering a caregiving profession with young children, we become a parent-like figure in the life of the child,” he says.

Unfortunately, offensive stereotypes do persist, and many people still question the motivation of a man who wants to be around kids all the time—the unspoken worry is that he might be a pedophile. “Touch was something I was trained to be cautious of…as a young male teacher, I could not engage in it.” Over the years, Hughes got around this Catch-22 by expressing care in different ways. He practised being present, listening, making eye contact or using what he terms “caring language.”

Neiger, too, has noticed some hesitation from parents. “Men are aware of these preconceived notions, and it’s a risk—I have to be more careful around the kids. Female teachers can give hugs. I’ve perfected the one-armed pat.”

School boards are trying to get more men into the classroom, and the key may be raising the profession’s profile so that it’s more valued in the public eye. But how? “It continues to be one of the primary debates,” says Dianne Gereluk, who researches educational policy and is associate dean in the Werklund School of Education at the University of Calgary. “Men need to be visible in the teaching profession; similarly, we need to see males in nursing or see that females can be firefighters. It challenges children’s perceptions of what is possible. It challenges gender stereotypes.”

For that reason, Alison Billings was excited when she learned that her daughter, Hayden, was going to have a male teacher for grade one. “She had never really had any male authority figures in her life outside of her dad and grandfathers,” explains Billings. Hayden did not share her mom’s enthusiasm.

“When she found out she was going to have a male teacher, she didn’t want to go,” Billings says. Hayden, now eight, ended up having a great year, and she excelled again in grade two, under the tutelage of a different male teacher. “She loves them. She’s really blossomed,” says Billings.

Many parents readily rhyme off the benefits of having male teachers, from engaging boys through the use of technology or sports analogies to incorporating more movement into the classroom. All those pluses have Cherie DeBoer-Smith raving about her son Gabe’s grade four teacher.

“He just made school more appealing,” says the mother of three boys. “He understands my kid’s need for activity. They do a lot of movement breaks; they do a lot of daily physical activities outside.”

DeBoer-Smith says the teacher was also fantastic when it came time to tackle health and the human body. “It’s nice for the boys to be able to hear from a man about some of those things,” she says.

But do these teachers have such a positive impact because they’re men? Or are they really good teachers who just happen to have more body hair and testosterone? Dan Laitsch, an associate professor in the faculty of education at Simon Fraser University in Burnaby, BC, says this is an important distinction to make, as it’s likely the latter—when a man chooses elementary education, he’s bucking the norm, ignoring the stigma and doing so because he really wants to teach kids. More than his gender, he’s bringing his values and skills into the classroom. Maybe that’s why he’s so good at the job. “They see it as a meaningful career, where they can make a difference,” says Laitsch.

In his experience, all teachers who are passionate about their jobs, whether male or female, are great teachers. “As far as research is concerned, there is no link between teacher gender and student achievement,” Laitsch says.

Great teachers inspire achievement, and seeing those light-bulb moments is what Neiger finds so rewarding about his job. He loves watching his students go from not understanding to “Wow, I get it!”

As for his rapport with kids, he mentions his use of technology and his ability to relate to them. If his gender plays into it at all, it’s simply because he’s the only male teacher. “I’m a novelty,” he says. “I do have that hook. It’s just something different they haven’t had before.”