on April 1st, 2013 Posted By BG in Articles
by John Tierney 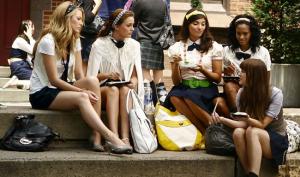 Let’s all pause for a silent moment of compassion for young male teachers in all-girls high schools. Theirs is a difficult job.

Riiiiiight, some of you young men may be thinking. I’ll sign up for that work.

But that sense of the young male teacher’s plight is one clear impression I’ve gained from a decidedly unscientific survey I recently completed of fifty of my former students, girls I taught when they were juniors or seniors at a private, all-girls high school outside Boston, from which I recently retired. I contacted these young women, all of them now college students or recent college graduates, to get a sense of how they perceived their male and female teachers in high school.

I asked each of my former students if she would tell me how she regarded her male and female teachers (not individually, by name, but as genders). I wrote to each of them:

My interest in these questions came, at least in part, from comments I heard from female teachers over the years. Some of them, especially the older ones, felt invisible to their students or felt the girls simply liked the male teachers more than their female counterparts; the male teachers seemed to receive all the attention. According to such complaints, the girls were more likely to make male teachers the subjects of their comedy skits, for example, or cast male teachers in the videos they would make for all-school events. These were seen as evidence of students’ greater affection for the male faculty.

Having wondered over the years whether there was any substance to my female colleagues’ perceptions, I did a Web search that failed to produce much in the way of scholarly or journalistic information on this subject. So, I simply decided to go to the source—the girls themselves—and ask them about it. Forty-six of the 50 young women I contacted wrote back to me. Here’s some of what I learned, with more to come later.

Two principal themes emerged from the responses I received. The first is that, contrary to what some of my female teaching colleagues believed, the girls respected them more than they did their male teachers. More than half of my respondents made comments indicating that their female teachers commanded more student respect because they were stricter, more demanding, more focused in class, less likely to be nudged off topic, etc. One student wrote:

Some of the students noted that the older female teachers were nurturing and “maternal” in the way they dealt with the girls; many found that comforting, others found it off-putting (“no one wants a second mom”).

A different recurring observation in my former students’ commentaries made it clear that the age of their teachers often seemed to matter more than the gender. Young female teachers were prized because they are “easier to talk to and relate to,” some of them “willing to be a friend of sorts, asking about your personal life and sharing school gossip.”

A senior at a west-coast university observed:

I don’t think there’s generally a huge difference as far as gender is concerned. The teacher’s personality matters more than gender. The big exception would be young male teachers. We gave them so much shit. Poor Smith and Jones [names changed to protect the victimized]. Senior year I would make intense eyes at Jones and toss my hair whenever I saw him just to watch him squirm. We didn’t take young male teachers seriously. We’d giggle loudly whenever they walked by the couches [the students’ lounge area]. The other exception is that male teachers usually totally freak out at the sight of tears or any mention of ‘women’s troubles,’ and I know some girls took advantage of that.

I know this was true about the way the students teased and harassed the younger male teachers. I observed it myself.

Probably the most horrific story I received along these lines actually involved these girls when they were still in the school’s lower grades (there’s a middle school, too, with grades five through eight). One of them, now at a university in the Boston area, reminded me of a story I had heard from multiple sources over the years:

The only time I think there was any difference [in the way we interacted with male vs. female teachers] was possibly in middle school when girls thought they could get away with things if they related them to “female problems” with the male teachers. One instance that comes to mind is when a student threw pads and tampons around the room to make a male teacher feel uncomfortable and then asked if she could be excused.

That wouldn’t happen in a classroom with a female as the teacher, nor in a classroom headed by an older male. As I said at the start, when I think about the plight of inexperienced, young male teachers in an all-girls school, I feel compassion.

I should note, by way of conclusion, that perhaps I was oblivious to the truths around me, but I never felt I was at any advantage or disadvantage relative to the female teachers in dealing with my students. But maybe I should have. The best-known study on how a teacher’s gender matters, published in 2006 by Thomas Dee of Stanford University, found that middle-school boys learn more from men and middle-school girls learn more from women. Dee found that having a teacher of the opposite sex hurts a student’s academic progress. Though controversial, Dee’s findings raise serious questions that education researchers should explore.

And my informal inquiry suggests that, at least in an all-girls school, male teachers have to fight the desire to be liked and work on those behaviors that produce respect. And young male teachers in such settings apparently need to understand that they’re swimming with sharks.