on October 10th, 2010 Posted By BG in Articles
by Dan Taylor - The Press Democrat - California, USA 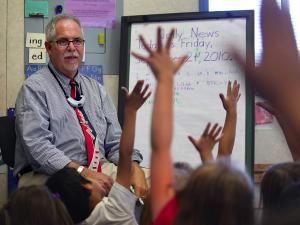 Eric Ord stands out at his workplace. For one thing, he wears red tennis shoes and a matching red tie. And he towers over everyone else in the room.

Of course, everyone else is 5 years old.

For the past 17 years, Ord has taught kindergarten at Whited Elementary School in Santa Rosa, where colleagues call him “The Pied Piper.”

One recent afternoon on the Whited playground, children called out “Mr. Ord” roughly twice a minute, while Ord patiently addressed complaints such as “She’s kicking me,” and “He took the hula hoops.”

A quiet man with short gray hair and a neatly trimmed Van Dyke beard, Ord herded his 20 lively students inside and began coaching a few on reading and writing, one at a time, while other children worked at tables, assembling puzzles or drawing pictures.

“I obviously have the academics to cover, but they at the same time, they do need to play,” Ord explained. “This is their place to learn about being in school.”

Working with a small girl on her writing, on a sheet of paper at an easel, Ord coached her gently.

“Do you know how to write a ‘g?’ How about I do it for you this time, and you trace over it. Then make one on your own,” he said.

Ord stopped often to deal with interruptions from other children, both at his elbow and from the other side of the room, but he always came right back to the lesson.

“I run a tight ship,” he said later. “I have very high expectations for behavior. Finding that balance between firm and fair isn’t always easy, but I think it’s necessary.”

Ord said the key to getting along with students, and still getting the work done, is mutual respect.

“I tell them what I’m thinking, and I never talk down to them. I throw big vocabulary at them daily, and it’s amazing how quickly they start to use it in their everyday language,” he said.

Instead of shouting to be heard, he uses hand signals: tapping his head to say, “Come back later,” or holding up an index finger to say, “Wait a moment.”

“I love his demeanor,” she said. “He doesn’t need to raise his voice to be effective. He has such great respect for his students.”

Ord, 57, started his teaching career at Lake Tahoe and came to Whited 25 years ago, teaching at every level except sixth grade before settling 17 years ago into his role as one of three kindergarten teachers at the school.

The U.S. Bureau of Labor statistics lists the percentage of male kindergarten and preschool teachers nationwide at just 2 percent. Ord can’t explain why more men don’t teach kindergarten, but he knows why he does.

“A kindergarten slot opened up, and I was just intrigued by the idea of building the foundation of an education, and then being able to watch those kids progress through the grades,” he recalled.

Married for 27 years, with a son and daughter in college, Ord has matured while meeting a new crop of kindergarteners every fall. And he’ll admit the pace takes a toll.

“The first two weeks of kindergarten are the hardest and the most tiring,” he said. “This year, I went home the first day and took a nap.”

While Ord insists on serious study, the atmosphere in his classroom is full of fun. Take those red tennis shoes, for example. This is not his first pair, and he also has them in black.

“These shoes have become a bit of a trademark. Probably 15 years ago, my wife got red ones for me on Valentine’s Day and said, ‘Wear them once,'”he remembered. “Well, it became crazy.”

Every spring, Ord pulls 20 ukuleles out of a back cabinet and rehearses his class for a performance at the school talent show.

“I teach half the class to play one chord, and the other half to play another chord, then I conduct, and switch back and forth,” he explained. “We play simple songs, like ‘Itsy Bitsy Spider.'”

Whited School Principal Tom Castagnola is a big fan of those ukulele concerts, and of Ord’s teaching style.

“Mr. Ord runs a rigorous classroom,” Castagnola said. “The impact he has on those children’s lives is so great that they return year after year to visit him, even after they’ve graduated from the elementary school.”

In fact, Galloway credits Ord with inspiring her to become a teacher, and she’s just one of several former Ord pupils who now teach.

“He still continues to have an effect on my life,” Galloway said. “I only hope that as a teacher I have that kind of effect.”

Galloway remembers that when she was a student in his second-grade class, his way of dealing with her and the other chatty girls at her table was unusual.

“Rather than just splitting us up, he made an agreement with us,” she said. “He made it clear that if we wanted to stay together, we had to be responsible.”

Ord said he enjoys his young students and learns from them.

“They say funny things,” Ord said. “I had one boy who just loved shark books. He called me over one day, and he was serious. He said, ‘Mr. Ord, I’ve got to tell you something. If you’re ever attacked by a shark, don’t run.'”

Ord finds endless variety in his interactions with his students, not only from year to year, but during each day.

“I hope to guide them, and prepare them for success in the future,” he said. “And ‘future’ could mean an hour later, or it could mean 20 years later.”