on September 24th, 2013 Posted By BG in Articles
By Ryan Houston - WSFA.com News 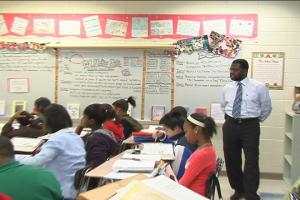 he Federal Teach campaign was designed to get more minorities, especially men into teaching.  An estimated 1 million teachers will retire in the coming decade, and that means there will be a lot of positions to fill.

Education leaders want to fill some of the openings with a more diverse workforce. Christopher Drake has been teaching at Robert Cross Elementary for 18 years.

He says it’s not uncommon for him to be the only male academic teacher in the building. And to stop that trend, education should be an option proposed to kids at an early age.

There are a lot of rewards that come from working in a classroom. “The energy that I get from the students. I can see it on their faces that I’m making a difference. I can see it when I grade their papers,” said Drake.

There are only 5 male teachers out of 33 women at Robert Cross Middle School. “In the past, I’ve been the only academic male teacher in the building. It’s just something I noticed,” said Drake.

He hasn’t let that stop him from doing what he loves. And he’s good at it. Drake has won teacher of the year twice. “I absolutely love being in the classroom. I wouldn’t trade it for anything. This is my home away from home,” he said.

Drake believes female and male teachers are equal, but he’s noticed how some of the kids react on the first day of class. “At the beginning of the year some of the students, are a bit taken back by my teaching style. I don’t think it’s all the teaching style. It’s just new and coming from a man,” he said.

Even though he’s part of a profession dominated by women, it doesn’t bother him, and he gets the job done. “I just show up and teach. I just do the best I can in order to ensure the children get the education they need,” he said.

As to why there is a shortage of African American Men in the classroom? He believes it’s a taught behavior. “Traditionally most males are raised thinking ‘I have to make enough money to take care of my family’. I think there’s a misconception that education does not pay enough,” he said.

But Drake has made it as a successful teacher in a women’s world, and he’s hoping other men will join him. The federal teach program is geared towards adults 19 through 25.

It offers help finding money for school and information on certification. In a year where 80,000 teachers are hired only 17% of those are African American men.