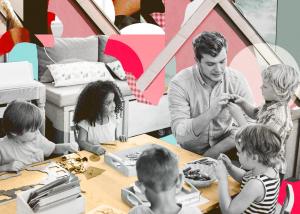 I wasn’t quite sure what to expect as I dressed in khaki pants and a polo shirt and prepared to attend my first day of orientation as a pre-K teacher of 3- and 4-year-olds. I walked through the school doors for the first time, taken aback by the miniature size of the furniture I saw as I peeked into an empty classroom. I wasn’t the only one in for a surprise. When I arrived, a female colleague greeted me by exclaiming, “Wow, you’re a man!” This puzzled reaction was one I would receive often during my four years of teaching young children.

If someone were to visit today’s early childhood classrooms, they would be struck by the almost complete absence of male teachers. In fact, while the teaching profession as a whole is predominantly female, this is particularly true in the early grades of pre-K and kindergarten, where men make up only about 2 percent of the teaching force. At a time when many male-dominated fields like manufacturing are shedding jobs, and most of the fastest-growing industries, such as health care and education, are ones that have been traditionally performed by women, this could be a crucial opportunity to encourage more men to enter the important field of early childhood education, particularly since the United States lags behind most other industrialized countries in access to early education. Studies show students benefit when they are surrounded by a diverse group of teachers that reflect the makeup of society as a whole, including educators of different races and genders.

I decided to teach young children because I had greatly enjoyed the time I spent in college mentoring a first-grade student as part of a community tutoring program. I formed a friendship with the student and his mom over two years of weekly meetings and watched with satisfaction as he made great strides in math and reading. My decision to teach was also influenced by the large amount of research showing the long-lasting impact a high-quality teacher in the early years of a child’s life can make.

In my first year of teaching, I was the only male teacher on staff, but as the school grew in size, a few more men joined the ranks, and we began to discuss the particular highlights of being a man who teaches young children. Over rounds of beer at Friday happy hours, a group of three or four of us who taught grades ranging from pre-K to third grade talked about the importance of serving as a male role model for our more challenging students, approximately three-fourths of whom we realized had no male figure active in their lives. After I spent extra time each week after school with one such student who struggled with behavioral challenges, he told me near the end of the school year that he wanted to be a teacher when he grew up so he could teach kids how to be happier in school like I had taught him. We also took pleasure in the things that keep any teacher motivated: My colleagues discussed the profound sense of accomplishment we experienced when, thanks to our guidance, a student was able to read a sentence or write her name for the first time.

But we also talked about the challenges of being a man who teaches young children and why more men don’t choose this career path. Of course, compensation levels aren’t high for teachers of any gender, which makes teaching a hard sell for many people. And friends and family would sometimes respond with disbelief when we explained our career choice. For example, while making small talk at a family wedding, I was asked my profession and mentioned that I teach pre-K. My interlocutor nearly choked on her champagne, paused as if to ensure that she had heard my answer correctly, and then bluntly asked, “Why would a man want to teach young kids?”

But behind closed doors, my male colleagues also discussed what we agreed was the largest, though often unspoken, barrier to recruiting more men into the field—a legitimate fear that male teachers might be labeled as potential sexual predators and even falsely accused of sexual abuse of children. We were acutely aware that just one allegation of misconduct, even if proved false, had the potential to wreak havoc on a teacher’s personal and professional life.

In interviews I conducted with male teachers of young children as part of my graduate studies, every man I talked with brought up the stigma of being a potential danger to children. Teachers told me that you have to “watch yourself” at all times in a way female teachers don’t because an innocent gesture, such as a hug, could be perceived by others as suspicious. One veteran kindergarten teacher in D.C. put it more bluntly, saying, “Some people assume if you’re a man teaching young kids that you’re somehow a pedophile or weirdo pervert or something.”

These anecdotes line up with the limited amount of academic research that has been conducted on the topic. After conducting numerous interviews with male teachers, Paul Sargent concludes that “operating under constant intense scrutiny influences every aspect of the men’s teaching lives.”

These persistent suspicions about men who teach young children are puzzling at a time when fathers are increasingly involved in the care of their own children and national ad campaigns encourage fathers to become more involved in the lives of their children. A father seen changing his child’s diaper at a restaurant wouldn’t strike anyone as odd, or perhaps he would even applauded for doing his fair share, but this sentiment does not extend to men who choose to teach and care for young children.

To help us past these fears, schools should perform comprehensive background checks on all individuals who wish to work with children, no matter whether the role is that of teacher, substitute, bus driver, or volunteer. Currently, the process and efficacy of background checks in schools varies widely among states and districts. Fears of abuse by teachers are not unfounded, but certainly aren’t limited to men teaching very young children. A recent investigation found that teachers have been able to conceal past misconduct as serious as physical and sexual abuse simply by moving to a different state to teach. A national database maintained by the federal government that lists all teachers who have had licenses revoked would be a major step forward in ensuring the safety of students (the United Kingdom already has such a system in place).

To protect students and provide clarity to teachers of all genders, districts should put clear policies in writing regarding what sort of touch is allowed between educators and the students in their charge. Many teachers of young children are never provided with this sort of clarity and are left to figure it out for themselves and hope for the best. Is it ever OK for a student to sit in a teacher’s lap while being read a book, for example? I didn’t allow this when I was a teacher, but I know many of my female colleagues did so without hesitation. I’m in agreement with the National Association for the Education of Young Children’s position that strict “no-touch policies” are unrealistic for teachers of young kids, but explicit guidance from the district about what sort of touch is allowed could help all teachers avoid uncertainty, and make everyone feel better about the motives of men who become teachers.

Male nurses were as rare as male early educators just a few decades ago. Since 1970, however, the number of male nurses has tripled as the stigma has started to fade and more men have found a growing and vibrant vocation in nursing. The entrance of men into nursing has coincided with increasing wages in the field as a whole, suggesting an increase in male pre-K teachers might be good for the women in the field, too.

If we now accept that men can find professional satisfaction in a job that involves dressing wounds and comforting patients, it shouldn’t be hard to accept that men can also enjoy and make contributions by teaching the alphabet and reading story books.

Aaron Loewenberg is a policy analyst with the Education Policy program at New America, where he is a member of the early and elementary education team. Previously, he taught pre-K and kindergarten for four years in D.C.