on May 10th, 2016 Posted By BG in Articles
by Nathaniel Cary - Greenville News 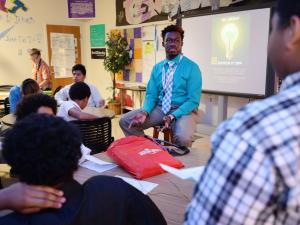 When Walter Lee was a young child, his poor, rural town of Eutawville near the banks of Lake Marion in Orangeburg County, built a new school. Somehow his father ended up with an old chalkboard and some school desks, which he brought home, and Lee would play teacher.

“When I came home, I would write down my to-do lists on the board, I would act like I was teaching,” Lee said. “I had the desks, I had the chalk. I had the dry erase markers. I had the Post-it notes. I had the stapler. I had it all.”

In third grade, Lee wrote an essay that he wanted to be “the world’s greatest teacher.”

But by high school, that dream had faded. He’d lost sight of his goals. His grades had slipped some, though he was still considered a leader in his school.

It just didn’t make much sense for a young, African-American man to pursue a career in teaching. So he thought about business, music, English, religion, philosophy.

But a program that had started at Clemson University and partnered with Claflin University in Orangeburg drew him in. It was called Call Me MISTER. And it provided a teacher-training program with a goal toward recruiting, supporting and retaining minority teachers, particularly men, to teach in the classrooms of elementary and middle schools in South Carolina, where they were nearly nonexistent.

The program provided him the support, mentorship and accountability he needed to succeed. Now, Lee is a fourth-year teacher at Tanglewood Middle School in Greenville and he can see first-hand the impact a black male teacher can have.

The students benefit when they see someone who looks like them or — and Lee reaches up to touch one of his short, tight curls — has hair like them, talks like them, listens to the same music as them, he said.

At a stage of life when boys are being pulled toward dropping out, toward acting out, toward gangs, the impact of a teacher who identifies with them is greatest, he said.

That’s why Call Me MISTER exists. And that’s why the eyes of nation are now beginning to try to replicate the teacher-training program’s success.

Since the first cohort of African-American men graduated from a fledgling Call Me MISTER program in 2004, nearly 150 other men have gone through the teacher-training program and become educators in South Carolina elementary and middle schools.

Every single one is still employed in education, either in the classroom, in administration, in their own businesses or in college classrooms, said Roy Jones, the director of Call Me MISTER who has been involved since its inception.

And 95 percent of those graduates are teaching in schools in South Carolina.

That’s nearly unheard of among teacher-training programs. Across the country, 17 percent of teachers quit the profession within the first five years. At high-poverty schools, where many of the MISTERs teach, the quit rate is higher, at 20 percent.

Now the nation is looking at the program developed at Clemson as a model of recruitment and retention of black men to the teaching profession.

The United States Department of Education has invited Jones and several graduates of Call Me MISTER to attend the National Summit on Teacher Diversity on May 6 in Washington, D.C. The summit invites participants from programs across the nation to speak on the issue of diversity in the teaching profession. It seeks to gain commitments from institutions to seek, train, retain and support minorities in education careers.

“We’re really scattered throughout the state and serving in some of the most needy schools in SC,” he said. “Just about all MISTERs are in Title 1 schools, most at the elementary level.”

Still, African-American men make up less than 1 percent of teachers serving at the elementary level in South Carolina, he said.

So Clemson has collaborated with 19 South Carolina colleges and universities to expand Call Me MISTER (Mentors Instructing Students Toward Effective Role Models) into more locations and increase interest among minorities to go into teaching.

Now the program is expanding into neighboring states and soon could go nationwide.

Call Me MISTER, which is trademarked through Clemson, has been licensed to colleges in eight states and recently the W.K. Kellogg Foundation funded a $1.3 million initiative between Clemson and Jackson State University to develop a pipeline of African-American male teachers in Mississippi using Call Me MISTER.

George Petersen, dean of Clemson’s Eugene T. Moore School of Education, said expansion of this type of program is encouraged by the school and needed to drive long-term change.

“Our teacher population should mirror that of our students, which is why diversity among teachers is a complex but important issue that demands a national conversation,” Petersen said in a statement. “It is fitting that a program as successful as Call Me MISTER be a part of that conversation.”

The success of MISTERs in the classroom can be linked to several factors within the program, Jones said. Students move through the program as small groups of cohorts where they learn together and bond. They are given individual attention and academic support to help them succeed. They qualify for tuition assistance through loan forgiveness programs. And the program helps them with job placement.

Call Me MISTER follows up with all of its graduates and expects them to follow-up to mentor the next generation of teachers, Jones said. It hosts a summer institute each June and a six-week long internship run through Upstate schools. Many of the teachers return as advisors, he said.

“The relationship we have with MISTERs is very, very close and we expect from Day 1 that they will give back to the program as well as their communities when they become professional teachers,” he said. “Once a MISTER, always a MISTER.”

Those factors are what Jones plans to share with others at the national summit, Jones said.

“We’re being viewed as a success model for addressing this crisis,” he said. “Nobody is having this success that we’ve been having.”

Lee, at Tanglewood, said he still calls other MISTERs for advice with classroom issues and attends meetings of cohorts to provide mentorship.

It’s a program that continues to give support long after teachers have settled into their careers.

“I was ushered into Tanglewood Middle School through someone who was a MISTER. He’s an administrator now,” Lee said. “There was another MISTER who was hired at this school and I was able to be a mentor to him.”

Boys walked into Lee’s classroom at Tanglewood on Friday morning in twos and threes. They set down their laptops and stood talking before class. Each wore a collared shirt. Most wore neckties. A few stragglers ducked into a restroom to tie their tie or received help from a friend.

The school doesn’t require the ties, and most of their classmates don’t wear them. But it’s become part of the code for these 11 boys. They’re part of a club, a program of their own, something to belong to, to build accountability, respect and responsibility.

Lee flipped the script. He started this extracurricular program at Tanglewood last year to provide a time for them to talk and to listen, to help each other, to develop into leaders.

The mentee became the mentor.

He called it Never Leave Brothers Behind.  They meet once a week just to talk. Sometimes they have guest speakers. Recently, they took a trip to Atlanta where they learned about Martin Luther King Jr.

“It’s not so much a mentorship program as it is an accountability program,” Lee said. “The guys are able to hold themselves accountability as well as each other academically, in their behavior and in the ways they present themselves to others.”

Lee had seen that boys made up half the school but three-quarters of the disciplinary referrals at Tanglewood. Most of those referrals were for “disrespect.”

Lee drew from tenets learned through Call Me MISTER to establish his own accountability program.

MISTERs have to critique each other, to do their best to develop their fellow MISTERs.

“It is that concept that I pulled from to make sure this organization was able to assert the same influence with the kids,” he said.

The boys had to apply to get into his program. People from outside Tanglewood conducted interviews with each one. He wanted the program to be for students who needed a push but wanted a challenge.

As Lee held a conversation at his desk Friday, some of the boys came in with shirts untucked and began to horseplay.

Lee stopped mid-sentence. He spoke with a firm voice, but he didn’t tell the boys what to do.

“You guys make a decision as to whether or not you’re going to tuck your shirts in,” he began. “Talk about the ramifications. ‘If I tuck my shirt in, how do I look? How am I perceived? What is my image?'”

One boy started to tuck his shirt in. Lee stopped him.

Then, he turned back to his conversation as the boys talked amongst themselves.

They decided to tuck them in.