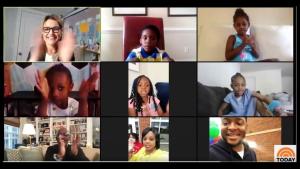 He was named Georgia’s Pre-K Teacher of the Year last fall and was recognized as the first black man to get this honor.

Johnathon Hines, a pre-K instructor at Barack Obama Elementary School in Atlanta, got another surprise on the TODAY Show on Monday.

This week TODAY is kicking off a special series called TODAY Loves Teachers, honoring teachers who have gone beyond the call of duty due to the cornavirus pandemic.

Hines has been working so hard to stay connected, he said, even personally delivering work to the students’ homes.

“We definitely built a culture in our class room of love. Keep learning never stop learning. I want them all to be ready for Kindergarten,” Hines said on the show.

TODAY Show host Savannah Guthrie help connected the beloved teacher with his students, even allowing Hines to show off how smart the children are – on national television.

Hines previously told 11ALive that he feels there’s nothing better than teaching a child to love to learn, and he does it unconventionally.

Singalongs, dancing, and energy are the hallmarks of Hines’ classroom. In fact, he often outdoes the energy of the 4-year-olds in his class.

So not being able to connect with them face-to-face since the coronavirus pandemic halted in-person teaching, has been tough.

But Hines wasn’t coming on television just to brag on his students. He got a surprise when meteorologist Al Roker came on and announced a $45,000 donation.

“In honor of being a devoted teacher to your school and to your pre-k students, Five Star is donating $45,000 worth of school supplies to your school.”

Roker said they wanted the students to get a fresh start when they returned to class.

“This means the world to me. Especially my community. These school supplies will go a long way and help many, many families,” Hines said.

Barack Obama Elementary School principal Angela Thomas-Bethea said it was the largest donation the school has ever received.