on December 21st, 2015 Posted By BG in Articles
by Katy Reckdahl - The Atlantic 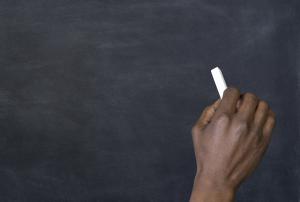 During his high-school days, no football game could start without Louis Blackmon III: the team’s center. Each play began with his snap.

Though Blackmon was renowned for his hustle on the field, he didn’t put the same effort into the classroom. “In school, I was just an average guy,” Blackmon said. Typically, he pulled Cs, with a few Ds, at McDonogh 35 High School in New Orleans.

That led to heartbreak his senior year, when his ACT scores came back a few points below college-entrance standards. Almost overnight, he lost the attention of college scouts, who had told him he was a prime candidate for an athletic scholarship.

Yet today, Blackmon, now 21, is a standout student at Southern University at New Orleans, in the Honoré Center for Undergraduate Achievement, an intensive new program that gives full scholarships to young African American men who show promise despite unremarkable transcripts.

All of the program’s participants, known as “Honoré Men,” study to become teachers—because the program’s founders believe that promising young men who grew up in tough circumstances are uniquely equipped to connect in classrooms with youth facing similar challenges.

The Honoré Center is one of a small but growing number of specialized programs aimed at boosting the number of black male schoolteachers, who make up roughly 2 percent of the nation’s teaching force.

The best-known example of this new approach to teacher training is South Carolina’s Call Me MISTER program (Mentors Instructing Students Toward Effective Role Models), which began in 2000 at Clemson University. Last year, a group of four small colleges and universities in Pennsylvania launched their own Black Men Teaching Initiative, which grooms black-male high-school students and teaching assistants to be teachers. Meanwhile, the Teacher Quality and Retention Program, run since 2009 by the Thurgood Marshall College Fund, and the recently formed Boston Teacher Residency Male Teachers of Color Network, aim to support existing black male teachers, who are more likely to leave the profession.

The programs are a small part of a growing national imperative: to increase the number of black men working in the nation’s public schools, where “minority” students now constitute a majority.

Honoré Center founders consider the program unique because it starts with an unlikely group of students, sometimes referred to by education analysts as “the bottom quartile” of scholars because they lack the requisite grades, test scores, and financial means to attend college.

“We take these young men who were expected to go to jail or graduate at only a 20 percent clip. And they’re succeeding,” said former Southern University President Ronald Mason, who designed the Honoré Center as a national pilot program with hopes of boosting the numbers of African American males in two key areas: college graduates and teachers in urban schools.

Johnny Taylor, who heads up the Thurgood Marshall College Fund, said that success at the center will be “a key moment” within an array of often-disappointing programs. “There have been a lot of dollars expended on the black male over the past few decades, with little to show,” he said.

Mason sees Honoré Men as “hidden stars” who can, with several years of concerted investment, reach their full potential in a way that breaks through barriers. (The Honoré Center is part of Southern’s Five-Fifths Initiative, a name derived from the nation’s 1787 Three-Fifths Compromise, under which each male slave was counted as only three-fifths of a man.)

In exchange for a full scholarship—free room and board and a small monthly stipend—each Honoré Man receives a loan that is forgiven if he teaches in public school for at least two years. That commitment to putting more black male teachers in schools was a big selling point for the Louisiana legislators who helped finance the center, starting with its launch in 2012.

Incoming students must have a high school GPA of at least 2.0 and an ACT score between 14 and 19. Their income must also be low enough to qualify for a Pell Grant.

Basically, the program recruits intelligent kids who lack resources, said Lt. Gen. Russel Honoré, the retired U.S. Army man and hero of post-Katrina New Orleans who, at Mason’s request, gave his name and oversight to the center. “All things being equal, the only difference between these young men and some kid going through prep school off his endowment and driving a new Mustang is money and opportunity,” Honoré said. But most of the center’s participants lack those resources. Instead, many come from dire poverty, Honoré said, recalling a young man who cried when he first saw his dorm room; he had never before had even a bed to himself.

Five years ago, in a commencement speech at New Orleans’ Xavier University, U.S. Department of Education Secretary Arne Duncan kicked off an effort to increase teacher diversity. Duncan decried the lack of black teachers, noting that when he headed up Chicago Public Schools, most of the students were black, but many schools lacked a single black male teacher.

Nationally, 16 percent of public-school students are black, but the proportion of black teachers is less than half that: only 7 percent of the nation’s teaching force.

Jones and others note that black teachers were not always scarce—in 1950, half of all black professionals were classroom teachers working in the nation’s dual-race, segregated schools. But in 1954, the U.S. Supreme Court declared segregated schools unconstitutional in its landmark decision, Brown v. Board of Education. In the subsequent decade, roughly half of black teachers lost their jobs, as black students were sent to presumptively superior white schools to be taught by white teachers.

The Honoré Center is rooted in the concept that black male teachers may be more effective at teaching young black men, who are more likely to struggle in the classroom and are significantly less likely than their white counterparts to graduate from high school and college.

The experience of Honoré senior Dominique Carter, who is greeted by excited children when he arrives at his school-arranged tutoring job, reflects another research finding: Black teachers are more likely to believe in black students’ ability to succeed. “I make them feel proud,” Carter said.

Within the Honoré Center ranks, only one student, Donovan Woods, was regularly taught by black male teachers, at Dr. Martin Luther King Charter School in the Lower Ninth Ward. (The author of this story sends her child to this school.)

Those male teachers prompted Woods to see his schooling through a different lens. “The difference between King and most other schools is that King is one big family,” he said. “I feel like I could play a big part in a kid’s life, because I’ve seen that, learned it, experienced it.” When he graduates, he’d like to return to King to teach, he said.

For years, researchers have pointed out that black teachers teaching black children create bonds that resemble family connections and support. While it’s evident that white teachers are also capable of nurturing students, teachers who are ethnically similar to their students are more likely to live in the same neighborhoods and share common experiences.

Research indicates that environments like those at the King school are likely a rarity across the nation. According to one report, 40 percent of public schools lack even a single minority teacher and, even in urban areas, teaching staffs are predominantly white.

University of Pennsylvania researcher Richard Ingersoll, who has studied teacher diversity for decades, found that efforts to recruit more black teachers have actually been fairly successful; the challenge is keeping black teachers in the classroom. According to Ingersoll’s data, which tracked teacher turnover over a recent 20-year span, the annual rate of minority teacher turnover increased by 28 percent, with many teachers leaving due to a reported lack of influence within their classrooms and schools.

When placed against that backdrop, the results of Call Me MISTER are instructive : Of the 150 fully certified black male teachers who have graduated from the program since 2004, all are still working in education. “Nobody has quit,” said program leader Jones. “The only ones not still in the classroom are principals.”

Jones is encouraged that his data runs contrary to national trends. “The secret sauce? We believe in the ability of the youth to succeed,” he said.

Jones witnesses his program’s greatest moments after graduation, when a “Mister” returns to his hometown school, a place that often has no other black male teacher. “They own the place,” he said. “They’re treated with great reverence, a great respect. That’s what we promote—they are now called Mister, and we’re changing the stereotype of black males.”

Desk legs scuff against the floor as the Honoré Men prepare for an evening session. Most have fresh haircuts, the result of a crackdown by residence coordinator James Riley, known as Coach, who makes sure that everyone follows curfews, cleans their rooms, and looks neat.

Warren Bell, the program’s director, gives an approving nod at the newly shorn students in front of him. Then he sits at his desk and sighs, telling the young men that he has been waking up at 3:30 a.m., worried about how to keep them on track. “How do I get Honoré men to do what they’re supposed to?” he asked them, fretting about whether to hold back stipends to get some of the newer students’ attention.

Most Honoré Men are on track to graduate within five years as classroom-ready public school teachers. Of the 30 young men who have completed at least one semester at the Honoré Center since it began three years ago, 87 percent are still enrolled in college, with a retention rate that has increased over time.

Bell acts like a helicopter parent, nudging participants who become complacent and interfering in nearly every aspect of their lives. Students must sign in each morning between 7:30 and 9:00 a.m. (“An Honoré Scholar should be accustomed to rising early to start his day.”) They must keep monthly academic calendars, turn in tutoring logs and weekly goal sheets on time, attend “Manhood Mondays” evening seminars, and track grades on all papers, exams and quizzes.

Honoré Center participants are kept under close watch far beyond the classroom. They aren’t permitted to drink or use drugs; they can’t have overnight guests. They have strict curfews and can’t even go home to their families on weekends without permission. One of the students who left the program calling the rules “intrusive,” a criticism that Bell has embraced. “We are a very intrusive environment,” he told a visitor, proudly.

Yet some Honoré participants learn to appreciate Bell. Davon Leggett, an original Honoré student who withdrew from the program but continued his studies on campus, still made daily stops at Bell’s office. “Davon never gave up,” Bell said.

In August, Leggett was fatally shot near his family’s home in New Orleans, on his way to his neighborhood barber for a haircut. It was a dark day at the Honoré Center.

After consulting with the registrar, Bell determined that Leggett’s classwork merited an associate’s degree. And so, the day before Leggett was buried, Bell slipped the young man’s diploma into his coffin, before an audience of tearful Honoré Men.

Leggett never earned his bachelor’s or entered the classroom to teach, but in some ways, Leggett became the Honoré Center’s first graduate. His loss “reminded us why it’s so important to do what we do,” Bell said.

Blackmon, Leggett’s close friend, thinks that the program’s tight oversight is a must. After his father died from gun violence, Blackmon was raised by a strict mother, Stacie Blackmon, who “refused to lose me to the streets,” he said. In recent years, he’s watched closely as his high school classmates dropped out of college, one by one. Only a few remain in school.

Next spring, Blackmon will become the first person in his extended family to earn a bachelor’s degree. He hopes his graduation starts “a domino effect” in his family, so that all of his cousins will see college as a possibility. It’s like football, he said. “The play starts with me.”