on January 3rd, 2013 Posted By BG in Articles
Interview by Kate Hammer - The Globe & Mail 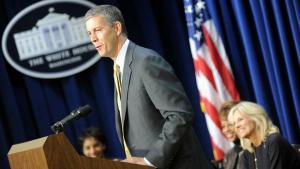 U.S. Secretary of Education Arne Duncan talks to The Globe and Mail’s Kate Hammer about why boys are falling behind south of the border, and what can be done to close the gap between genders in the classroom. Teachers, he argues, will be central to addressing this problem and he and his staff are looking at ways to recruit male minorities to teaching.

There is some debate, given that men earn more and hold more positions of power, as to whether boys are really falling behind. Do you think that in the United States the achievement gap between genders is a legitimate concern?
It’s absolutely a legitimate concern. In the United States you have, particularly in the inner cities, far too many young men dropping out, far too many of those who have dropped out end up getting locked up. And life prospects, job prospects are about zero when you’re a high school dropout. So how we engage them, how we keep them interested in school, how we get them to care about their long term futures is hugely important. These are international issues; it’s interesting how similar the problems are and how similar the solutions can be.

What can be done to address it?
There’s never one thing … I would argue it’s as early as third grade, or frankly as early as kindergarten when teachers know exactly who are the boys, the young men at risk … So I’m a huge believer in early intervention, so whether it’s additional tutoring, whether it’s mentors, whether it’s role models, schools can’t do this alone …We don’t have enough men and enough men of colour in our classrooms, particularly in our elementary schools. And I would go to some of my elementary schools in Chicago and there wouldn’t be a single male there. I think all of our children need a variety of role models and mentors, but particularly our young boys and our young boys of colour. In the U.S. today, less than 2 per cent, less than one in 50 of our teachers is a black male. If you put black males and Latino males together it’s about 3.5 per cent of our teaching work force. That’s simply not good enough.

What are you doing to improve those figures?
One of the things … is a national teacher recruitment campaign to bring in the next generation of teachers. And we’re going to particularly focus on bringing in teachers of colour and men of colour. So getting those role models in there is hugely important. And secondly, … really at the high school level, really making the work engaging, really doing things that motivate boys and give them a sense of what’s positive, giving them a sense of their potential is hugely important. Certainly myself, I struggled to sit and listen to a teacher lecture for an hour.

What age was that?
[Laughs] For me it was all the way through. Really, you need hands-on work … It’s a different way of teaching, it’s a different way of engaging students. The final two things I would say is that you have to have every child, boy or girl at risk with an adult in their lives who they can go to for help … And the final thing I’d say about high school today is [students need]a real sense of what’s possible after high school. So there has to be some reason, some connection, whether it’s a job, whether it’s a career, whether it’s going to college, you have to give all students, particularly young men, a sense of why are we doing this activity, what does this mean for my life? And so I think it’s a lot, because there isn’t one easy answer, but I think all those things together, when done well, give you a chance to dramatically improve outcomes for young men.

Why recruit minority males? It has been argued that it doesn’t matter whether a teacher is male or female; it is whether they’re good or not.
I think it’s important to have a diversity of good teachers. So yes, a good teacher is absolutely the bottom line, but good teachers come in different sexes, different colours and what I worry about in the States is an increasing divergence between what our teachers looks like and what our students look like. And I just want our teachers, our coachers, our principals to reflect the tremendous diversity of our country. I think that just makes us stronger, it makes us better and I think it helps all students to learn from teachers from a variety of different backgrounds and skills.

Tell me more about the teacher recruitment program.
The quality of the teacher is by far the biggest determinant of success. Three good teachers in a row, and the average student is going to be a year-and-a-half to two years ahead of grade level. Three bad teachers in a row and the average student’s going to be so far behind it’s hard for them to ever catch up.
The stakes here are extraordinarily high, so start with that. Then we have, and it’s probably similar here, I’m not sure, we have a baby boomer generation that’s moving towards retirement.

So we have about 3.3 million teachers in the States, and we anticipate that as many as a million teachers, a third of our work force, will be retiring over the next four, five, six to eight years. So if you start with the premise that talent matters tremendously at any time, we have literally a once-in-a-generation opportunity to transform the teaching work force in our country.

What’s the carrot you give to recruit men and minorities to teaching?
Again, it’s no one thing, but we have to elevate the teaching profession in the States. I’m working very hard to do that. I think teachers are the unsung heroes in society, I think teachers have been disrespected too often, have been beaten down … There’s been some real disincentives for real talent to come in [to teaching] … in July we passed something called income-based repayment … if you go into public service after you graduate, 10 years of public service, including teaching, all your debt, all your college debt is forgiven, is gone, erased. So there used to be lots of financial impediments. Lots of folks I talked to wanted to teach but had $60,000 to $80,000 in loans and simply couldn’t afford to do that. We’ve removed that barrier.

What else?
I would say one thing that we’re pushing real hard are alternative routes into [teaching] And so schools of education can be part of the solution on this … [such as]getting folks out of the military, veterans coming back to serve. Mid-career changes. There’s just lots of pools of talents out there who have historically had a hard time getting into the classroom and we think are phenomenal folks who can really make a difference … And you have to create a climate where folks who have great talent see this as their life’s work. No one’s goes into it to make a million dollars. The people who go into education are the most altruistic, they want to make a difference …We’re talking about the third profession. How do you put doctors, teachers, lawyers in one breath? That’s sort of what we’re thinking about.

This interview has been edited and condensed.