on January 31st, 2014 Posted By BG in Articles
By Sara Lenz, Deseret News 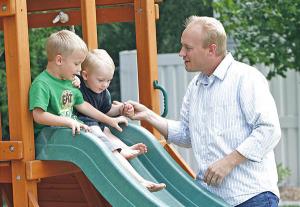 The fifth grade students in Brad Ericksen’s class know what their teacher will be doing after school today. They can tell by his outfit — a navy blue shirt and khaki pants.

He’ll be working at Walmart.

“I work there to make ends meet,” says Ericksen, whose wife stays home with their three kids. The fifth-grade teacher at Lincoln Elementary School works between 20 and 25 hours a week at his second job on top of working at least 40 hours a week as a teacher. And he’s been doing this for more than two years.

“I’m not rich, but I’m happy,” said Ericksen, who is one of two male teachers at the school — a pretty typical setup in elementary schools around the state, nationwide and even internationally. In Utah, just 11 percent of elementary teachers are male, according to ’08-’09 data from the state. And the numbers are even bleaker for the earlier grades: Out of the 14 teachers in pre-K in the state in ’08-’09, none were male.

Ericksen says part of the reason he believes more men don’t go into teaching is because of the salary.

The other two main reasons are fear of false accusations and stereotypes, said Bryan G. Nelson, director of MenTeach, an international organization that works on creating a more diverse educator work force.

“There’s a stereotype that men don’t have the capacity to be patient,” Nelson said. “There is a societal message for them to not enter the field.”

Nelson has gone to different high schools around the country, asking young men what their parents would think if they told them they wanted to be an elementary teacher or nurse or go into another traditional female occupation. Often before he has time to finish his sentence, the boys start laughing.

Yet, many Utah teachers and principals, both male and female, believe it’s important for there to be a more equal number of male teachers in schools. In Utah, just over 25 percent of teachers are male.

“I think our kids need them, especially in a Title I school like ours where at least 20 percent of our students don’t have regular contact with an adult male,” said Christine Whitaker, who has been a principal in Davis County for nine years and was an elementary teacher for the preceding nine years. “They bring a different perspective to the classroom and students need to have both perspectives.”

Eriksen said his fifth-grade class has an even higher percentage of students from broken homes and thinks a positive male role model can make a difference in his students’ lives.

Many elementary schools in Utah have just a handful of male teachers — some have none.

Randy Ockey, who teaches fourth grade at Highland Elementary, is one of five male teachers at the school but thinks some students learn certain concepts better from female teachers while others learn them better from males.

The lack of male teachers in elementary schools, though, can also have a cyclical effect.

“What message do young boys get when they look around and see primarily women and don’t see any men: This is not a place for me, not a place I belong,” Nelson said

Last year, the University of Utah had a slightly larger than normal male population graduate in the early childhood licensure program, said Mary Burbank, the U.’s director of the Urban Institute for Teacher Education. Yet, just two out of the 20 students who graduated were male.

Wade Gardiner graduated from the U. a few years ago and said he was one of those students who decided he would be a teacher for life. “I was determined to be a teacher and to stay in the system,” Gardiner recalls.

Yet, just a year into teaching full time, he said he had no choice but to apply for a higher-paying job. He had student debt, a wife and a child, and even though they were living in a basement apartment, he said they couldn’t survive on the money he was making.

The low pay of teachers started in the late 1800s, Nelson said. Women started going to more school and delaying marriage, and that is when schools figured out they could hire women and pay them less. Even today, the average starting salary of teachers is fairly low in part because most teachers are only contracted to work for nine months out of the year. Recently, though, policymakers have talked about doing a year-round school model in part to increase the number of contracted days for teachers. Many people consider teaching a good second-income job.

This is why many men who do go into K-12 teaching end up getting masters’ degrees to raise their pay or even switch over to an administration position, which has a higher number of contracted days and therefore a higher pay.

That’s what principal Reed Hodson at Highland Elementary did several years ago. He taught for 18 years but worked part time during the school year and full time during the off-season. He said it is much nicer to be able to work just one job.

But even if the pay were increased, Nelson said studies show that most male teachers would not be interested in going into elementary teaching. He said there is a stigma in the society that needs to change. He has spoken with many high school counselors who say they don’t recommend elementary teaching to young men. And traditionally teaching, especially elementary school teaching, has been thought of as a low-status job.

“I love every minute of my job every day, but then I come home and read about the politics, and it just can erode the souls of the teachers,” said fourth-grade teacher Ockey. “It’s hard to hear what is next for teaching and how it is being micromanaged.”

Cindy Wright with the Provo School District said if teaching were more valued by society, more people in general would want to go into it.

Yet, there are some programs that are making great strides in encouraging more males to go into teaching. One that started in South Carolina called Call Me MISTER has recruited more African-American males to go into teaching. Earlier this year, Secretary of Education Arne Duncan encouraged more African-American and Hispanic males to become teachers, saying that although 35 percent of the student population is African American or Hispanic male, just 2 percent of teachers are.

MenTeach, which is based in Minneapolis, is researching to see if the percentage of male teachers in a school has any effect on dropout and graduation rates.

But Nelson believes than in the next few years the number of male teachers in schools will rise.

In the past hundred years, there have been upticks in the number of male teachers when the economy is down and when troops are coming home from war, with men being forced to go into different careers, said Nelson. And with the current economic downturn and thousands of troops set to come home in the coming year, he believes this will happen again.

But Nelson said encouraging more males to go into teaching does not say anything about the quality of the current teachers.

“It’s not about men versus women,” Nelson said. “Women do a great job of teaching. It is about what is best for our children. When you look around the world, you notice it is about half men and half women — why not have the schools reflect that?”