on October 18th, 2016 Posted By BG in Articles
by Goorish Wibneh - The Seattle Globalist 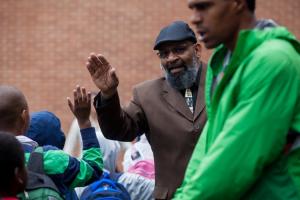 The Seattle Public Schools has a well documented “achievement gap.” That’s the striking difference in academic achievement between black male students (and other students of color) compared with their white counterparts.

As of last year, SPS also has a five-year strategic plan to address the gap.

But one crucial, and strikingly simple solution is not explicitly mentioned in the plan: more intentionality and effort behind recruiting black male teachers.

The teacher data on the Washington State Report Card is curiously reticent about gender, so we don’t know how many of those 155 black teachers are men, but nationally female teachers far outnumber men. Seattle Public Schools was also apologetically reticent responding to questions about teacher demographics and programs to increase teacher diversity.

But shouldn’t our school teachers mirror the rest of our city, as a melting pot of diversity?

In the U.S., the need for the presence of black-male professionals around students is more than just the need for role models. There is an uphill battle to change that negative stereotypes of black men that abound.

DeShawn Jackson, special ed instructional assistant at John Muir Elementary School, helped plan an event at his school that would emulate the popular #SeattleHigh5 gatherings held at Leschi Elementary School two years running. The idea is to show positive images of black people and other POC to young students.

But Jackson’s “Black Men Uniting to Change The Narrative” event last month was cancelled due controversy brought by detractors, who were likely not comfortable with the Black Lives Matter reference.

“There are so many negative narratives about black men that have been out [in the media],” Jackson said, “I wanted to show [the students] that not all black men are in prison, killing each other or deadbeat fathers.”

He also said any type of presence of black professionals in schools as volunteers or teachers would override the media narratives in the minds of students.

We can try to train all teachers to understand all cultures. But I would argue that diversifying the predominantly white and female teacher population should take precedence over providing trainings.

Culture (whatever that is) is better internalized by immersion than by training. Formal “cultural competency” trainings are false solutions that may fall into the trap of reductionist boxing of cultures. At the very least, they are not commensurate with urgent need to combat stereotypes through counter-storytelling efforts.

But events like the ones organized by by Jackson and #SeattleHigh5 give me pause as well for their lack of sustainability.

“Of course, we are not going to be able to greet them every day at school,”  Jackson concedes, “But now, hopefully, those men can come back and be mentors.”

Mentorship programs should be encouraged, but they’re just one type of unsustainable solution.

Indeed, as a black man concerned with the achievement gap, I occasionally volunteered at the Rainier Beach High School in the last quarter. I was also in talks with a friend who works there on a possible pilot project to set up a peer math club for black male students.

As commendable as our volunteer efforts were, black-identified mentors and clubs are not enough.

If schools would hire black male professionals proportional to the the black male student population size, not only will they help change the damaging narrative about black men, but also improve African-American student engagement, and thus narrow the “achievement gap.”
Why is it hard to recruit black male teachers?

Part of the reason for low numbers of black male teachers is, apparently, that successful professionals, including U.S.-born black men, don’t choose teaching as a career.

Maybe that’s because it doesn’t pay very well. According to Jackson most teachers don’t do it get rich. Instead “they do it out of love for the children,”  he said.

If so, one should wonder why it’s disproportionately white women who teach for the love of their students (including black males). It is a fair assumption that men (black or white) and black women would do it for the love of students, too.

It’s also concerning that this white love for students is not reciprocated by the students themselves. As a recent study from New York University shows, students of all races seem to prefer teachers of color.

So I think the main reason we have overwhelmingly white women teacher population at this time is, in part, because potential teachers have all seen more white women as teacher role models when they were students themselves. And it’s hard for some students, especially black boys, to see themselves being a white female teacher, isn’t it?

I joke, but it’s true that, although society continues to realize the fluidity race and gender identity, black male masculinity is in stark contrast with white femininity.

For Jackson’s part, he said he didn’t have his first black male teacher until he went to college.

He worked in the well-paying insurance industry for close to 16 years before it occurred to him to volunteer at Muir, where he went to school himself growing up. The reason? His daughter was going to kindergarten in the school and he had been laid off during the housing market crash.

“To not see those people that look like me, from elementary to middle school…to high school, I didn’t really want to come back and be a teacher,” he said, “I didn’t know if it was something that I can really do.”

An untapped workforce
So what about claims that there are not enough black teachers to hire from?

Even if the pool of U.S.-born black male professionals willing to be a teachers is low, there are so many underemployed immigrants that public schools could hire.

A 2013 study, cited by OneAmerica in its Reducing Brain Waste report, found underemployment is worse for black immigrants (47 percent) and Latinos (46 percent) than other immigrant populations nationally.

It wouldn’t surprise me if many of these were already experienced teachers. A friend of mine and I casually counted about a dozen Ethiopian immigrants in Seattle who were teachers back home and now are mostly working as taxi drivers.

Guesh Gebremariam, who is now a Registered Nurse, is one of them. Back in Ethiopia, he had been assigned to be a teacher after graduating in applied mathematics, scoring among the top three in Addis Ababa University in 2007. Then he won the Diversity Visa lottery and came to the U.S.

“When I [first] came here I was kind of naive. I was confused what to do,” he said, describing why he didn’t continue as a teacher in the U.S.

There are at least two major bureaucratic steps for immigrant teachers before they can apply for a job in their profession. First, they have to have their degree from their home colleges evaluated by U.S. agencies. Second, they must take U.S. teacher trainings and certifications.

However, getting the information and navigating the quality assurance bureaucracy is no trivial matter, especially if new immigrants don’t have the right people in their circles to enable and encourage them down that path.

“The people are who you live with or your sponsors have a huge impact on your life.” Gebremariam said. He said he tried to meet a lot of people working in different fields. “In the first year, the information I was getting about [a job] as a teacher, especially…for us with foreign accent, is that it’s difficult and the payment is poor.”

I asked Gebremariam what would have helped him get into teaching.

“In my understanding, I think there should be something for immigrants, like advisory or organization that can help and engage them to get the right information,” he said.

He says he is glad with his new career as a nurse, which he studied for for four years once he came to the U.S. But his profession would likely have been different if he’d been well informed and influenced toward teaching as an option.

It seems as though potential immigrant teachers, just like young students, need to see more role models of teachers who look like them.

“The information that I had gotten was totally wrong,” Gebremariam said, harkening back to his early career decisions when he came to the U.S. “I wish I was shadowing teachers as I shadowed the nurses. At that time, I really loved math and I may not have changed my field.”