on December 14th, 2015 Posted By BG in Articles
By Lyndsey Layton - The Washington Post 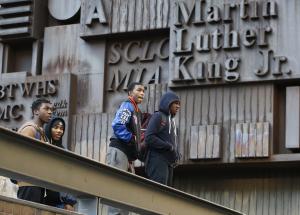 New York City, which has the nation’s largest public school system, wants to hire 1,000 black, Latino and Asian male teachers by 2017 to create a teaching corps that more closely matches the student body.

The program, called NYC Men Teach, is part of the Young Men’s Initiative, a city program that focuses public and private funding on ways to reduce disparities between young black and Latino men and their peers when it comes to education, health, employment and the criminal justice system.

While approximately 43 percent of New York City Public Schools male students are black, Latino or Asian, about 8 percent of male teachers belong to those groups. Of the city’s 76,000 teachers, just 6,600 are men of color, city officials said. Nationally, black men make up just two percent of the nation’s teaching workforce.

Richard Buery, the city’s deputy mayor, said that kind of imbalance is unfortunate.

“It’s both common sense and common sense reinforced by research that we will do better if we have a more diverse workforce in our school system,” Buery said in an interview. “There is lots of research that shows it promotes self-esteem and better academic performance. We think white students will benefit as well from having diverse teachers because it breaks down stereotypes.”

NYC Men Teach is a three-year, $16.5 million initiative under Mayor Bill de Blasio (D) that aims to step up recruiting, guide applicants through the selection process and retain current teachers.

The school system will work with the City University of New York and Teach for America to recruit new teachers, Buery said. The program will offer help to undergraduate students to make sure they complete teaching certification requirements and will offer professional development grants for current teachers, run advertising campaigns and work with career counselors at local and national universities to promote teaching as a career for men of color.

If teachers outside of New York want to teach in the city’s schools, the program will help them obtain reciprocal teaching credentials, Buery said.

A number of barriers exist that prevent black, Latino and Asian men from choosing teaching as a career, he said.

Nationally, fewer people overall are seeking to enter the teaching profession, Buery said. But men of color are frequently turned off by teaching because they had negative experiences themselves, he said.

In addition, there are structural problems, such as when prospective teachers who get job offers in the spring cannot afford to wait until the following fall to start earning a paycheck, he said. To remove that barrier, NYC Men Teach will offer short-term employment to men of color between their hiring and the start of school.

Once men of color do become teachers, they often feel isolated, he said. “If you are one of only one, or two male teachers in your school, that could be alienating, as it would be in any workplace,” Buery said.

“More than anything, we want to make sure that people around the country know we value teachers of all dimensions here in New York City,” he said. “We want to welcome teachers of any background, but we’re offering support so that teachers of color will want to come here and stay.”