on September 1st, 2016 Posted By BG in Articles
by Jenna-Ley Harrison - The Summerville Journal Scene 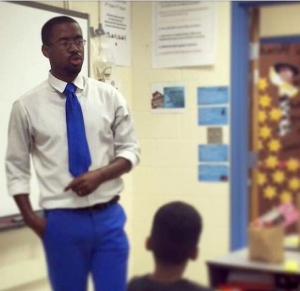 Growing up, Summerville teacher ReZsaun Lewis never felt connected with school. He grew up in a rough North Charleston neighborhood and watched his two brothers suffer from poor decisions. Lewis said he, too, might have ended up in jail like one of them, or on a different life path, had his middle school chorus teacher Marianne Williams not taken him under her wing.

“She was the first person to really take a long-term interest in me,” Lewis said. “She was an amazing teacher.”

Though she’s since passed, her memory and impact on Lewis’s life remains just as powerful, he said. He and several former choir members even gathered to sing at her funeral years later.

Lewis said he hopes to mirror her influence in the lives of local children, particularly young boys and teens.

Lewis said he plans this school year to start a Summerville chapter of a mentoring program already operating in North Charleston and Hanahan.

“I wanted to do something useable in schools…and outside of schools,” he said.

Called the Distinguished Gentlemen’s Club, or DGC, the program was started by Hanahan police officer Ricardo Perry, a school resource officer at Hanahan Middle School. Perry developed the program through Connections and You Inc., a nonprofit he both founded and directs.

After talking to Perry and learning Summerville lacked its own program chapter, Lewis took on the task of starting one.

“I care about mentoring; I care about developing the minds of young children and being able to help them,” he said.

For the last two years Lewis has taught at St. Stephen Elementary in Berkeley County. He was even named him Rookie Teacher of the Year in 2015. But next school year he’ll be transitioning to the newly-constructed Sires Elementary School in Summerville, to be closer to home.

Ironically, Lewis said he never wanted to be a teacher. He entered the military after graduating from high school and served just under seven years as a paralegal with the United States Army, which took him on various overseas missions.

Upon exiting military life he took on odd jobs working as an insurance salesman, barber and AT&T specialist. But he wasn’t happy.

Not really certain what he wanted to do with his life, he went back to school at Trident Technical College.

It was there he gained insight into his life’s calling. A math teacher asked Lewis if he had ever considered the profession. The rest is history. Lewis took on the major and later transferred to the College of Charleston where he completed his teaching degree.

“The first time I was in the classroom I knew I loved it,” he said. “I was like, ‘Oh, this is it. It’s really, really an awesome thing just being able to see the light behind (students’) eyes when they get something, and even when they’re struggling with something, being able to help them.”

Lewis said the gentlemen’s program is structured for grades three through 12 and anyone interested in joining the group can apply during the month of August.

A kickoff event will take place July 30 at Wassamassaw Community Park in Summerville, where the group will continue to meet until finding a new indoor location. Lewis said he’s currently emailing local principals about using a school facility.

All students who apply, and their parents, will undergo an interview process where they’ll learn the the program’s requirements. But the requirements aren’t strict and mostly include participation and attendance.

“The only thing we really want is for people to be consistent and participate,” Lewis said.

Chosen applicants will then go through a training program from September to December, culminating in a large-scale induction ceremony into the club.

Members will officially start the program the following year.

Lewis said ideally he would like to have 10 mentors the program’s first year, with each mentor assigned up to eight students. But after a recent interest meeting with 23 men, he said only eight returned mentor applications. But there’s still time to add more.

“I want to be able to affect as many kids as I possibly can,” Lewis said. “We could change a life. If we could put one less drug dealer on the corner, we’ve made a difference.”

The purpose of the program is simple: teach young males how to be gentlemen.

Lewis even developed his own course for the program, called How to be a Gentleman 101, taught through scenarios and classroom instruction.

“We’ll teach how a gentleman should walk, talk, conduct himself in public, treat a lady, including what’s acceptable if you’re on a date,” Lewis said. “They should know what it means to be a gentleman. The things we assume people should know inherently, we (will) teach them.”

The course, designed to be four weeks, will be spread out over a four-month period. The group will meet three times per month: once for character building, a second time for community outreach and a final time for small groups and one-on-one mentoring with mentors.

Lewis said he would also like local businesses and other organizations to jump on board and support the club. He particularly wants to forge a partnership with Summerville Police Department “to help build trust between kids and police,” he said.