on January 10th, 2020 Posted By BG in Articles
by Jackie Mader - Hechinger Report 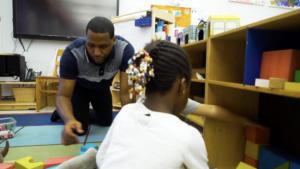 One early childhood educator said he wanted to be a male role model for children. Others were drawn to teaching after becoming fathers. Several said they like teaching young children because it allows them to make a difference in their communities. These are just a few of the responses researchers received from a survey of male early childhood educators, the results of which were released recently by a team from the Borough of Manhattan Community College.

The survey and the resulting study are an attempt to determine what influences men to enter the female-dominated early childhood education field—and the challenges they face once there. The team reached out to 81 male early childhood teachers in New York City who work in classrooms with children between the age of three and second grade; 46 teachers completed the surveys.

Nationwide, only about 3 percent of early childhood teachers are male, which experts say can have an impact on young children whose conceptions of gender roles and identity are rapidly forming.  Research has found that having access to diverse teachers is beneficial for children; for the youngest learners, it means they are more likely to get exposed to different varieties of play and communication, and helps them develop healthy ideas around gender. “In our world and our society, we have these very specific stereotypes of gender roles,” said Mindi Reich-Shapiro, an assistant professor in the teacher education department of the Borough of Manhattan Community College, and one of the authors of the study. “It’s important for children to see other possibilities and other paths they can take.”

Despite mostly feeling supported by colleagues and family members, many of the male educators reported facing societal barriers or cultural resistance in their careers as early ed teachers. Some also reported “micro-aggressions and micro-invalidations” including parents that were surprised, skeptical or concerned that their child had a male teacher. Some of the educators surveyed said they had been advised by colleagues or administrators not to hug children or were left out of tasks like changing diapers.

Reich-Shapiro and fellow researchers Kirsten Cole and Jean-Yves Plaisir, recommend several policy implications that cities and programs can consider to increase male representation in the field:

Pay: Low pay has long been acknowledged as a major issue in the early childhood field. The majority of survey respondents make an annual salary between $21,000 and $30,000, and 73 percent of surveyed educators who said they intend to stay in the early ed workforce noted an increased salary and/or benefits as a major motivating factor to commit to the career long-term. The report’s authors also suggest increasing pay at lower-paying sites and paying all early childhood educators like elementary school teachers (which is something the report acknowledges should happen for a variety of important reasons).

Mentorship: Many of the male educators included in the study said having access to mentors and male colleagues helped improve their craft and their morale. The authors of the report suggested programs establish support groups for male early childhood educators and provide mentoring and professional development experiences geared at male educators and their program leaders.

Recruitment: The authors of the report suggest that traditional recruitment approaches for early educators “do not address the gender imbalance in the field.” The recommended targeted outreach that provides young men opportunities to work with children through internships and volunteer programs and target groups of men who may be contemplating a career change, such as fathers. This includes creating outreach materials that include images of men working in the early ed field.Go to website.