on September 26th, 2014 Posted By BG in Articles
Compiled by Eric Schulzke 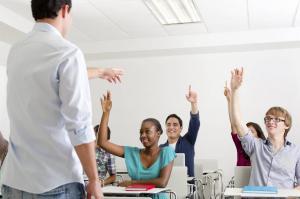 Boys will rarely if ever encounter a male teacher until they reach high school, a fact lamented by many both because teacher’s serve as important role models and because the lack of gender diversity tends to turn the profession into a prestige ghetto.

“We have so very, very, very, very few men,” Sherry Cleary, executive director of the Early Childhood Professional Development Institute at the City University of New York told NPR recently. “The sad part of it is that young children love to be around men. They love guys, they love their strength. They love that they’re fun and they feel safe and trust them.”

Ninety-eight percent of preschool and kindergarten teachers are women, and 82 percent of elementary and middle school teachers female, the Bureau of Labor Statistics reports.

“Deans of education departments lament the lack of men, but are not sure what to do about it,” The New York Times reports.

“I do think it’s a vicious cycle,” Susan H. Fuhrman, president of Teachers College at Columbia University, told The Times. “Women went into it without other options and it was a low-status profession that was associated with women, and the fact that it’s now dominated by women inhibits the status from increasing.”

The gender imbalance persists, but not for lack of trying. There is even a website for men interested in teaching or already engaged in early childhood education, which includes an enlightening report from a recent conference in Hawaii, where Donald E. Piburn reports that native Hawaiian attitudes toward men teaching early childhood education are markedly different from the rest of the country.

“Touch, hugging and physical closeness is a nearly universal value in Hawaiian culture,” Piburn wrote. “The very idea that members of the ohana should not touch one another, let alone not touch the children could be viewed as a cultural affront bordering on madness.”

Outside of Hawaii, male teachers sometimes find themselves having to explain themselves, another awkward factor that may deter some men from breaking the mold.

“Word got out my first year of teaching,” Phillip Wiederspan, a New Jersey teacher who has been teaching early childhood education for 26 years told ABC. “Parents would call the office to come and visit my classroom to see if they wanted their kids in my class. I remember that distinctly they just wanted to see.”

But some argue that male role models are needed in early childhood education.

Thompson cites several reasons why men don’t teach. “One is the nature of the elementary classroom. It’s more feminized and it does turn boys off, perhaps because they are in trouble more or because the teaching style is more geared to girls’ brains,” Thompson told ABC. “You go to an elementary school and there isn’t a man in sight except the custodian, and the kids love him.”