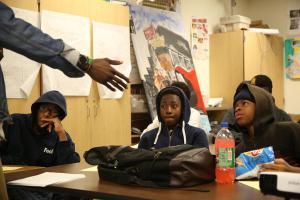 Tim Gates knew exactly what he wanted to be at a very young age.

“There are a lot of teachers in my family,” Gates said. “I’ve always wanted to be a teacher.”

Gates is teaching 5th grade at Martin Luther King, Junior Elementary School in Oklahoma City and loving every minute of it.

“It gives me the opportunity to give a gift that you can’t necessarily see.”

Gates if one of few male African-American teachers in the nation. He says he feels the extra pressure because for many of his students there isn’t a Black male teacher influence at home or at school.

“I am the father figure for a lot of these children because some of them are lacking that at home,” Gates said.

He says one of the reasons they’re leaving is because of where they’re placed.

“The schools that struggled the most, the schools that had the worst or the most challenging working conditions,” Bristol says. “Those schools were where we found the largest number of Black men.”

Bristol is now a Fellow at Sanford leading the effort to get men of color back into the classroom. He says the few that remain are walking away from teaching at alarming numbers.

“We know from previous research that teachers are more likely to leave schools that have poor working conditions.”

Bristol says nationwide only 1.9% of elementary teachers are Black males.

Bristol says that’s a big problem because the latest information he has shows in 2014, for the first time, students of color surpassed white students in U.S. schools.

Bristol spent five years teaching English in the New York City Public School system. Based on his experience and research, black males often become more of a security guard than a teacher.

“That was because there was this sense that I could somehow deal with these boys who were causing some challenges,” he said while reflecting on his time in the classroom.

Bristol says a third reason for the exodus from the classroom: colleges are doing a terrible job preparing Black males to be future teachers.

Gates graduated from Langston University and says his alma mater could have done a better job.

“As far as some of the things you mentioned – being a security guard, being that father figure – there are some things that I just wasn’t prepared for in life when it comes to this particular grade,” he said.

Bristol says without a teacher who is also a role model and father figure, it’s likely children of color won’t consider a career in education and the Black male teacher will become extinct.

But there is hope. Bristol says some communities are attracting Black male teachers to the profession. The Boston Teacher Residency Program recruits college graduates, those making a career change, and community leaders, and gives them the tools they need to make an impact in the classroom. Also, in New York the NYC Men Teach program seeks to unite Black, Latino and Asian men who want to teach today’s diverse student population.