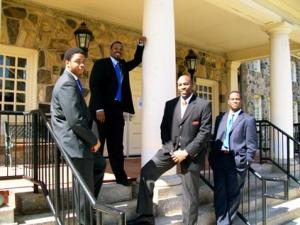 It’s 11:05 a.m. and 28 students at Fulton Elementary School in Germantown quietly file into Christopher Wright’s 6th grade math class. After taking their seats, they dive into their daily series of equations on the blackboard. After making his way around the room checking each student’s progress, he asks for the answers. Hands shoot up, and Wright dashes back to the blackboard.

One girl points out a mistake in one of the problems. “That number should be negative, instead of positive,” she said with confidence.

Wright responds with a smile, “You’re right. I’m just trying to trip you up.”

Wright has been with the District for eight years, five at Edmonds Elementary and three at Fulton, where he teaches math and science. It seems that his students are thriving.

But Wright is one of just a handful of African American teachers at Fulton, and the only Black male instructor at a school where 99 percent of the student population is Black.

Some dispute a direct link between same-race teachers and student gains, saying that students can benefit from all talented teachers. But a 2005 Texas-based study “The Market for Teacher Quality,” released by the National Bureau of Economic Research, reports “a positive value of matching students and teachers by race … and Black teachers tend to be more effective with minority students.”

“Looking at my boys in particular,” Wright said, “I’ve found that I can talk to them about my experiences growing up in North Philly because they have experienced the same things.”

He said they listen when he tells them “the choices they make today are going to affect them tomorrow.”

Currently, less than 34 percent of teachers are Black, Latino, or Asian in a district in which 87 percent of the students are non-white.

This year, just 17 percent of 984 newly hired teachers were African American, down from 28 percent in 2002, a figure cited in a never-released report from the 2006 Teacher Diversity Campaign.

Estelle Matthews, the District’s Chief Talent Development Officer, said she was not aware of the report, which provided a detailed action plan. But she said that the Ackerman administration is embarking on several initiatives to diversify the workforce and wants to increase teachers of color to 51 percent by 2014.

“Students of color need to see that role model and understand that what they see in front of them is attainable and that they can get there with a mentor and a support system,” Matthews said.

Reasons for the shortage

Teachers of color say that lack of support has kept untold numbers out of the profession. Carmen Brown-Perez, a Latino kindergarten teacher at Pennell Elementary who has been with the District for a decade remembers being discouraged while studying early childhood education at Temple University.

“I felt like this was my calling, but I had teachers who gave me a hard time,” she said. “One actually said to me ‘You’ll never be a teacher.’ But I think that made me more determined.”

A big factor in the shortage of Black teachers is the under-representation of African Americans in colleges of education. According to a study by the community organization ACORN, only 4.5 percent of the education degrees awarded at 24 Pennsylvania universities in 2004 went to African Americans, and just 1.1 percent to Latinos.

Failure to pass the state licensure exams, Praxis I and II, necessary for state certification, has also contributed to low numbers. According to data from the Educational Testing Service, which administers the test, African Americans often struggle to pass.

“There is an achievement gap that exists in our schools because of the quality of teachers that we have and the resources that do or do not come into the school,” said Garner, a first year teacher who came through Philadelphia Teaching Fellows. “That achievement gap runs deep and follows you through school.”

Matthews said the District had to drop over 270 teachers who failed to pass the test prior to the 2006-2007 school year; most of those – 61 percent – were Black. To help with exam preparation, the District operates a Praxis study group and covers the $450 testing fee for those who commit to stay in the system at least five years.

Donald Armstead has taught in the District for 17 years, the past seven as a business and computers teacher at Vaux High School. He said Praxis is not the best barometer of successful teaching.

“I have spoken to Black teachers who use ‘Black English’ or code-switch when they teach,” he said. “They may not always get their verb tenses correct, but they know how to connect with the kids, and succeed with them in ways that other people can’t.”

To recruit more teachers of color, the District is holding job fairs, attending national conferences, and meeting with local universities. It also hopes hires from Teach for America and The New Teacher Project (see Screening for teachers with the right stuff) will help diversity.

The District maintains three academies of urban education to introduce students to the profession, and offers one $10,000 scholarship each year to a graduating high school senior who intends to study education and teach in the city.

Matthews is also forging closer ties with Cheyney’s Call Me MISTER, an initiative founded 10 years ago at Clemson University that grooms African American men on 26 campuses for urban school districts.

Christopher Lewis, a graduate of FitzSimons High in North Philadelphia, is one of the 25 Black men in the program. “Throughout all my life I always had a teacher to encourage me, so now I want to be that encouragement for others,” he explained.

Lewis won’t graduate until 2012, but Matthews said partnering with the program early allows the District to provide support.

“I want to get to people as they enter the universities to talk about the opportunities within the School District and how we can walk with them for four years,” she said.