on June 25th, 2015 Posted By BG in Articles
The Northern Echo 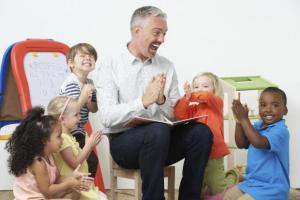 Only two per cent of early years childcare workers are male. Lisa Salmon talks to the Fatherhood Institute about their drive to get more men into the industry

Most men would love to be “a hero every day”. That’s the way working as a male childcarer has been described by men themselves, but there are still only a handful of males working in the field.

Despite years of progress towards greater gender balance in many professions, the early years education and childcare workforce remains stubbornly dominated by female staff – the latest figures show that only two per cent are male.

The Fatherhood Institute charity is striving to change this, pointing out that a huge effort is needed to make early years education and childcare jobs more attractive and accommodating for men.

The Institute has produced a Men in Childcare guide, based on work with eight local authorities, offering recommendations for how to improve recruitment.

“Governments have been talking about wanting to improve male representation in the early years workforce for many years, but we’re still a long way from cracking this,” says Fatherhood Institute chief executive Adrienne Burgess. “Our message to men is this: you’re just as capable of making a success of a career in early years and childcare.”

The Institute says barriers to male recruitment include: l Lack of relevant information and careers advice about working in early years education.