on August 30th, 2015 Posted By BG in Articles
by Janine Zeitlin - News-Press.com 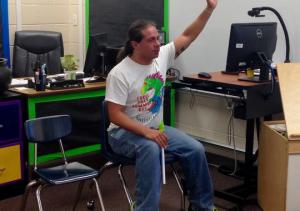 I neutered God in my family’s dinner prayer. It’s the same prayer I recited growing up as a Lutheran, but now that I’m raising two girls, I switched out the “father in heaven we thank thee” to “we thank thee.” I want my daughters to be grateful, but I don’t want to assign a gender to a God before they’re old enough to form their own conclusions about him. Or her. Or if one exists.

It’s not about making a theological argument; it’s about perpetuating patriarchy in the minutest of ways when, by virtue of being girls, they’ll face enough disparities later. Plus, I had noticed I was guilty of using “he” as my de-facto pronoun. Over the coming days, I caught myself as I regularly referred to turtles, ants and bees as “he’s.” As did my eldest, who is 5.

“Oh poor guy,” she lamented when we saw a flattened snake in my neighborhood.

We had neutered God but not her creatures. I made a conscious effort to refer to more insects, animals and birds as “she’s.” Weeks later, we saw a hawk and my daughter said, “She’s so beautiful.”

I gave myself a parental pat on the back. In the weeks before kindergarten, my daughter wondered about her teacher.

For open house last week, my husband and I headed to her new school’s crowded cafeteria, where parents and kids bounced between each other like pin-balls in the mayhem. We lined up at a table to await her classroom assignment. I offered my daughter’s name to the woman behind the table. The woman scanned the list. Her kindergarten teacher was a mister.

“She has a man,” I turned to my husband, who shrugged. I was surprised, though my own father had taught third grade. He brought strengths in science, math and exercise, areas he felt were sometimes neglected by his female counterparts. (On a side note, my dad chuckles when reciting the gender-neutral version of the family prayer; it’s too non-traditional for his taste.)

Only about 2 percent of America’s preschool and kindergarten teachers in 2013 were men, according to MenTeach, a non-profit started with the aim of recruiting more men to teaching. Those figures pretty much match Lee and Collier counties.

“For whatever reason,” said Jennifer Weimer, a Collier school district spokeswoman, “in elementary grades there are more women.” One of her colleagues mentioned pay as a factor. There are more chances to supplement a salary with coaching in high school. Lee schools didn’t speculate much either except that elementary and primary teachers, male and female, are an area of critical need.

I searched male kindergarten teachers online for something more concrete (I didn’t want to pepper my daughter’s new teacher with questions for publication the first week.). I found Chad Boender, the 24-year-old teacher in Michigan behind the blog malekindergartenteacher.com.

“It takes someone special to teach Kindergarten, male or female,” he said in an email. “Patience, creativity and salary are three reasons why more men are not Kindergarten teachers. I always say, ‘It’s not a job if you love what you do.’ I do not teach for the money.”

Greg Smedley-Warren, a 36-year-old kindergarten teacher in Nashville, has a strong social media following through TheKindergartenSmorgasboard.com, “where mustaches, glitter and great teachers collide.” It’s his seventh year. At first, it wasn’t by choice. When he found out he was being switched from second grade, he told someone “I’ll quit and go to McDonald’s” if assigned to kindergarten. He didn’t, but was terrified. On the first day, he sang and laughed and felt a pure feeling of joy.

“I had found my calling,” he said.

There are so few men in the position, he believes, because of stereotypes. Men may not feel like they belong in kindergarten and principals often tap them for older grades. He does feels like he has to work harder to prove he’s good.

“Men in kindergarten teaches our kids diversity,” he said. “We need more male role models for our kids.”

I began to feel lucky my daughter’s teacher was assigned to one of only 9 male kindergarten teachers in Lee and Collier counties. Her preschool teachers had been women and she could use a little gender diversity.

When we went to the classroom during open house, like any good kindergarten teacher would, my daughter’s teacher greeted her warmly. He offered cookies and a small bumblebee crafted with pipe cleaners. Later, she announced her new teacher was nice: “I love Miss Paul.” I corrected her. Like God, a kindergarten teacher can be a “Miss” or “Mister.”