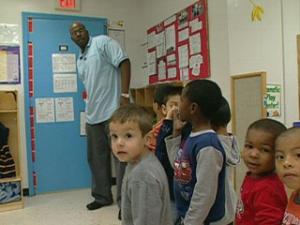 Recently, Lisa Guernsey at Early Ed Watch did a 5Qs Interview for Inside Pre-K. It is a series I have been doing mostly on authors writing about preschool. She was happy to do it but asked if, as part of a series at Early Ed Watch on Head Start, I would do one for her in return. I can tell you, a 5Qs interview is not as easy as I thought it was. When someone asks you tough questions about something you care about, you want to just spill your heart on the page. But, since it is a blog and not a book, you have to hold back a little. I thought I might take a chance this week to slightly expand on two of the questions Lisa asked me. I will post what I wrote in my response and then some thoughts I have had since I finished my Qs. Here was Lisa’s first question:

It’s unusual to find men teaching preschool. What should we do to change that?
As with any issue in education a lack of men in preschool classrooms can be addressed through treating symptoms or treating root causes. For example, in addressing the achievement gap the Harlem Children’s Zone is an approach that addresses causes; NCLB treated the symptoms, test scores. In medicine, addressing symptoms only works if the body has the capacity to cure itself. Obviously the achievement gap and lack of men in preschool are not something that will fix themselves even if we provide grants to hire men or require more men in classrooms.

So what are the root causes?
The struggle for gender equity has always focused on putting more women in men’s jobs. Only recently, in fields like teaching and nursing have men begun to step into the shoes of women. Women’s reasoning for entering the workplace of men has been clear: men make more money, have more respect, and have more power. The reasoning behind men entering the roles of women is much less clear. We pay plumbers more than child care workers. Why? Because we value our working plumbing more than children. It’s that simple when approached from an economic standpoint. It’s about the money.

The other issue is that men are discouraged from exploring their capacity to nurture as an avenue for employment. It is discouraged from a young age through lack of example and sometimes the dampening of boys’ capacity for empathy. As a society we associate nurturing behaviors with weakness and our culture rewards strength. A man who is caring towards children is considered less masculine and so less valuable, according to his peers, as a member of society. This is where the tired cliche of “woman’s work” turns on its head. Not that only women should care for children but that caring for children is a skill or capacity that is squashed in men from a young age. It is societal and until we begin to help boys grow up whole, we will never have men in younger classrooms. This is especially true in the community I work in. For some kids, I have been their first introduction to what a caring man can be. I have even been able to help some kids with fathers because the fathers are more comfortable volunteering in my classroom. The father sees how he can care without being weak and nurture without giving up his masculinity and become a more caring person.

This is changing, slowly, but I wonder if it may be changing too slowly. My supervisor has actively sought out men to hire and this year we expanded the number of men in our program to six. Of course that is six out of over 140 employees.

Here are my recent thoughts. One thing I have noticed is that many of the men I have met who are pre-k educators, are very talented and passionate about their jobs.

When I asked myself why that is, I thought many of these men have found teaching in preschool as a later career decision and have chosen it as a practical way to make a living while they are also focused on other passions, namely art, music, family, etc. What usually happens though, is they fall in love with it and they realize that they really enjoy and thrive on teaching. If I were to try to “sell” preschool teaching as a career to men here are some of the things I might say.

Teaching in preschool is a team effort, in that most classrooms have a lead teacher and instructional assistant. So if you enjoyed team sports as a kid you already have many of the skills necessary to work in this environment.

Teaching in preschool can be extremely rewarding. Working with at risk children has its own risks and rewards but truthfully, a relatively passionate and interested teacher can change a child’s life.

Many at risk children have never known a consistent father figure and if they have, that person may have been the “good times” guy and not the role model for a responsible caregiver much less represent a man/father in the traditional “Cosby Show” sense.

When young children and parents see a man in a classroom it automatically changes preconceptions about what school is. This can positively impact parents who have never had good experiences with school.

Young children need to be actively engaged while learning. If you don’t see yourself sitting behind a desk for the next ten years but you don’t want to work in construction (I almost became a house painter) then preschool teaching might be for you. It is a career that engages your mind and body.

You get to make messes, play tag, read stories, sing songs, play instruments and or make noise, and explore what it means to be a man all while getting paid a modest (not great) salary.

Most importantly, everyday you will make a difference in a child’s life, guaranteed, just by being a decent human being who is also a man.