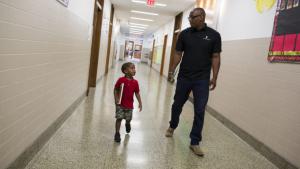 At Turner Elementary School in Southeast D.C., Torren Cooper is the only male of color who works directly in the classroom, even though the student body is 98 percent African American. Cooper is a literacy coach helping some of Turner’s youngest pupils with their reading and writing skills, including rhyming, alliteration, letter sounds and writing their names.

He is one of eight young men of color doing this work in D.C. Public Schools through a new program called the Leading Men Fellowship, which is wrapping up its first year.

The program trains recent D.C. public school graduates to be literacy coaches in some of the poorest schools in the city. DCPS partners with a local non-profit, The Literacy Lab, to develop the curriculum. The district provided training for the fellowships last summer and hosted weekly professional development sessions throughout the year. Nearly all the fellows graduated high school last year, but Cooper has his bachelor’s degree and is pursuing his master’s.

The Leading Men Fellowship program was created to address two different problems. First, it increases the number of males of color in early education, secondly — it helps reduce the gap in language development for preschoolers from disadvantaged backgrounds.

Being a role model
This year, there are 20 male teachers of color who work in early childhood education across DCPS — three percent of all preschool teachers. Turner Elementary Principal Eric Bethel says it’s important for young students of color to see teachers who look like them.

The fellows “can be more than just the positive role model,” Bethel said, “but can actually connect with students because they’ve walked in their exact shoes.”

Cooper understands how important is it for students to see themselves in their teachers. He was raised by a single mother, so he craved a positive male role model, which he didn’t get until he was in fifth grade.

His teacher that year “would challenge me with my school and my academics and my character,” Cooper remembered, adding: “He would also reward me and would make me feel like I was seen. He could see something in me, that he knew I existed.”

Cooper wanted to be that role model for other young students of color.

Narrowing the gap
The program’s second focus, on improving literacy skills among low-income preschoolers, is also critical to their development. Studies show children from low-income families can enter pre-K having heard barely 30 percent of the words that children from affluent families have.

As the pre-K teacher runs the overall classroom, Cooper provides targeted one-on-one instruction. Before this program, schools like Turner Elementary relied on the classroom teacher to address all the literacy gaps children brought to school, but that can be difficult.

“It is a capacity battle on some level. We know how to teach kids how to read,” says Tom Dillon, co-founder of the Literacy Lab. “We don’t have enough trained resources to actually reach every child with what they need when they need it,”

By focusing on pre-K students, the fellows try to close that language and word gap before it grows larger.

As the literacy coach, Cooper sprinkles in exercises wherever he can. When the students return from art class, they sit in a circle on the rug and practice alliterations.

Cooper even practices spelling and letter sounds during lunchtime. He sits on a very small chair next to the students as they eat lunch and writes each item on his white board.

The only time Cooper won’t pull the students is during gym class.

“Never pull them during gym because that’s their fun time, and I’ve learned they’re a little bit antsy during that time because when they have fun, they enjoy that,” Cooper said. “You want them to want to come.”

The toughest part of his job, Cooper says, is knowing that students don’t always have an adult at home who can reinforce these lessons once students leave for the day.

“It’s really challenging to send books home and send things home and they stay in their book bag and they don’t pull them out,” he said.

Some parents work multiple jobs. Or, they have difficulty reading themselves. Cooper says that situation makes Mondays the toughest day of the week. “Sometimes you have to reset and get them in the mode of learning and this is school and back into discipline and stuff like that.”

Still, Cooper says preliminary assessments show his students saw big gains on annual test scores from the start to the end of the school year.  Cooper’s fellowship ends this summer, but he’s been hired at Turner Elementary as a paraprofessional to continue this work.