on March 1st, 2016 Posted By BG in Articles
By Jay Mathews - Washington Post 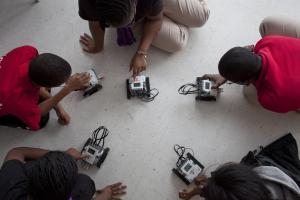 Cambridge College education professor Jim Horn presents his new book, “Work Hard, Be Hard: Journeys Through ‘No Excuses’ Teaching,” as a necessary antidote to my 2009 book, “Work Hard. Be Nice: How Two Inspired Teachers Created the Most Promising Schools in America.”

We are polar opposites on the issue of KIPP, the nation’s largest charter school network, and charters in general. He says, correctly, that he and I “have maintained a prickly relationship over the past ten years by writing from contrasting perspectives about corporate education issues and education reform schools.”

The reasons for our differences are illuminated by the way we handle the same material in our books.

My book describes two young teachers, Mike Feinberg and Dave Levin, who through trial and error and the guidance of a magical Houston elementary school teacher named Harriett Ball found a way to raise the academic achievement of inner city children. It is a story of bottom-up school reform.

Horn offers the opposite, a top-down story in which “venture philanthropists and philanthrocaptitalists through equity bundlers, bond investors, and hedge funds” poured billions of dollars into “charter management organizations.”

For instance, Horn is suspicious of my account of the first major news article in 1994 about the new KIPP program in Houston. It was a 2,799-word story on the front page of the Houston Post. “Mathews offers no details as to how an obscure little program in its first year with forty-seven students was chosen for such coverage,” Horn said. He suggests the rapidly growing national Teach For America program, which Levin and Feinberg were a part of, pulled some strings.

This is puzzling because I explained in detail what produced the Houston Post article. Reporter Susan Bezse Wallace, then 24, had gotten a grant from the national Education Writers Association to do three stories — not about charter schools or TFA, but about male teachers in urban schools. The headline of her KIPP piece was “FEW GOOD MEN.” The other stories in the series were about a male state teacher of the year and a charismatic coach.

Another mystery not explained by me, Horn said, was “how KIPP cofounder, David Levin, who in 1995 was a third-year teacher from TFA without credentials, found support from the Giuliani administration for opening the second KIPP school in New York City. How did this unknown and uncertified educational neophyte land a New York City teaching position with multiple classrooms and support staff in a public school building in the Bronx?”

The reasons were interesting enough that I devoted a chapter to them. They had nothing to do with then GOP mayor Rudy Giuliani. The man who got Levin his “multiple classrooms” (there were two) in the Bronx was Sy Fliegel, a former school administrator and social activist who had friends in the Bronx happy to hire Levin and his friend Frank Corcoran as new teachers because they seemed smarter and more energetic than the usual applicants for openings in such disadvantaged schools. Fliegel was famous for his support of teacher icon Deborah Meier, a sharp critic of corporate education reform. Levin and Corcoran found deep resistance to their work at the school they were assigned. Their experiment would have died altogether if the middle school director in the Bronx had not taken a liking to them.

Horn and I have very different perspectives on school reform. I think the best schools are the work of talented, dedicated educators who win the confidence of administrators and donors. He thinks those same schools are not as good as advertised by a vast marketing machine and think tanks, and are the creatures of billionaire foundations, bending educators to their will.

Give the two books a look and tell me what you think.