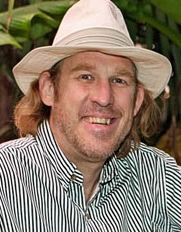 They can cook dinner. They can give hugs. And they can play baseball. Who says men can’t be nannies?

Kris Pohl is the first man to make it to the finals of England’s Professional Nanny of the Year competition.

Pohl told the London Evening Standard that there was no reason for men not to make first-class nannies although “there are some things I have to work harder at, especially with the very little ones. Baby talk does not come as naturally to a man but it’s essential.”

Pohl’s nomination seems to be indication that male nannies, aka, mannies, are becoming more widely accepted–or at least hip. After all, Madonna and Gwyneth Paltrow both hired men to care for their broods. (Nobody is really sure if Britney Spears’s male helper was a manny or a bodyguard.)

A 2006 survey conducted by the British Tinies agency, one of the largest domestic recruitment firms in the U.K., discovered that the number of families willing to hire mannies has risen. In a survey of 1,500 families, eight out of 10 parents said that it was more acceptable now than 10 years ago to hire a man to care for the children.

In New York, Annabelle Corke co-owner of Heyday Nannies says her boutique service placed about 90 nannies last year and of those 25 to 30 percent were men. Corke opened her business four years ago with her partner Deborah Crisford, and they have definitely noticed an increased willingness among families to consider males, and some parents are specifically requesting men. In fact on the company’s Web site, you’ll find “We also have mannies” advertised on the homepage.

Corke has many success stories of placing men. She worked with a mom whose 13-year-old girl and 11-year-old boy were fighting uncontrollably. A manny stepped in and solved the problem. She also placed “a big bear of a guy who you never thought would want to be a nanny.” When she recommended him to parents with two boys living in Brooklyn, they were initially resistant. “But when the boys learned he had grown up playing baseball and loved the sport, they were convinced,” says Corke. “He has been with the family for two years and they love him. He plays baseball with the boys after school and then he goes home and makes dinner.”

Makes dinner? Is she kidding? Corke says the biggest misconception about male nannies is that they aren’t wired for domestic duties. “People think they can’t change a diaper,” she says. “But if you have that trait that makes you good with children the gender doesn’t really matter. Everyone is capable of domestic duties. It’s the connection with kids that’s more important.”

In San Francisco, the trend has also caught on. Carrie Hillen, who owns Town & Country Resources with her husband, says her agency supports male nannies because one summer she had an “extraordinary” experience with a 20-year-old male college student watching her kids. The nanny was a La Crosse player and had worked with children at summer camps. “He would do lanyards with my daughter and play basketball with my son,” Hillen says. “He would actually get into the pool with the kids. He wasn’t concerned about getting his hair wet. I loved that we’d come home and he’d be playing chase with the kids. He was very active. But he was also caring and attentive.”

In the past decade, Town & Country has paired some 10 families with male nannies, with the majority of those occurring in recent years, according to Sarah Thigpen, a director and placement counselor. In the past, Thigpen only secured part-time jobs for men but last year she placed one in a full-time position with a family who had a 1-year-old baby boy. “He was perfect for the job,” Thigpen says. “He had a ton of experience from working at a preschool.”

The majority of mannies are in their 20s. They’re most often placed with families who have boys, though sometimes single moms request them because they want a male figure in the home. “There are times when a man is just suited better to the job,” Corke says.

Even though men are proving themselves to be outstanding caregivers, many parents are uneasy with the idea. They worry that men don’t have the innate instinct to nurture children, and even worse they fear pedophilia. Miriam Marin, a counselor at the Sandra Taylor Agency in Beverly Hills, says she hasn’t seen an uptick in families hiring men, and she blames the media’s sensationalized stories about child molestation. “We have these terrific guys who register with us,” Marin says. “But people these days have this mentality. They’re afraid.”

Most often the dads are the ones who don’t want to bring another male adult into the house. They’re less trusting, and they get jealous. “Dads don’t want their wives spending all this time with someone who is so great with his kids,” Corke says.

San Francisco dad Nathan Wells is one of those who doesn’t want a male nanny caring for his toddler. Interestingly, Wells was actually a manny when he was 19 years old. For two years, he watched a 4-year-old and a 6-year-old in Marin, dropping the kids off at school and picking them up and bringing them to the swimming pool. “I was a good guy,” Wells says. “Those kids were lucky they had me. But there are a lot of wacky people out there. I would hire me but I wouldn’t hire any other guy.”

Would you allow a male nanny to look after your children?