on December 12th, 2012 Posted By BG in Editorials
by JM Coetzee - Times 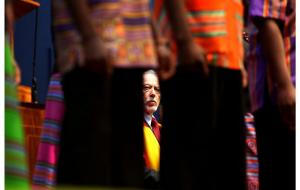 Acclaimed authour, JM Coetzee received an honorary doctorate from Wits University, in The Great Hall on the university campus. Coetzee, a double recipient of the Booker Prize and a winner of the Nobel Prize for Literature, received a Doctor of Literature degree.

Twenty years ago, if I had been standing on this platform addressing new graduates of the University of the Witwatersrand, I would probably have begun by saying: “What a pleasure it is to see so many young women among you. You are certainly beginning to assert your rightful place in the world.”

But today such a message would be out of date. Instead, what I am impelled to say is: “What a relief it is to see so many young men among the graduates in the humanities. What a relief that men have not entirely abandoned a field which they once used to dominate.”

There is a serious point to this observation of mine. It is out of your ranks, the ranks of graduates in the humanities, the social sciences, and the sciences, that most teachers of the future are going to be drawn, and I want to argue that it is not a good thing for education to fall too much in the hands of one sex.

In fact I want to argue an even stronger point: that it is important for there to be men, male teachers, at all levels of education. In particular, I want to appeal to the idealism of those young men who are already contemplating a career in education, and suggest that you think seriously about going into – I don’t know what the correct term is nowadays, in my day it used to called primary education – the teaching of young children.

Teaching young children – by whom I mean children under 12 – has usually been the preserve of women teachers.

I myself didn’t encounter my first male teacher until I was 11.

The women teachers in whose care I had been until that time had done a good job, I thought and still think. I look back on them with respect and affection. But if there had sometimes been a male presence in the classroom the experience would have been different and, I am convinced, fuller.

This has nothing to do with the personal qualities of individual teachers or even with what one might think of as general gender qualities – women being assumed to be softer and more motherly, men more demanding and more critical, for instance. It has more to do with the social lesson that a child might learn from being taught sometimes by a man, sometimes by a woman – the lesson that caring for children, opening new windows for them, giving them new ways to see the world, encouraging them but also correcting them, praising them and sometimes consoling and comforting them, is not a role restricted to women, that men can do it too.

It is not hard to make the case that it will be good for your soul to be with small children.

One of the dreary facts about jobs in what we call the real world – jobs in which you sell things to people, or buy things from people, or stare all day at a computer monitor fiddling with numbers and figures – is that you are haunted by the feeling that what you are doing is not real, that most of the people you deal with in your work are not real human beings but shadowy figures playing roles and wearing masks. Well, if you work with young children, I promise you will never have that feeling. Children can be exhausting, they can be irritating, but they are never anything but their full human selves. I hope you will be the kind of teacher who will not find screens necessary, who will welcome the honesty and directness of the child.

I put the case as strongly as I can: it is as much your right to undertake a career teaching young children, if you so choose, as it is your right, in a free country, to prepare for any other career; otherwise what is freedom worth?

If a man decides that working with children, teaching children, being among children, is more fulfilling than working with adults, then in my view he should be applauded and assisted on his way, rather than being treated as a potential abuser of the innocence of his charges.

I am under no illusions about what it is like for an intelligent and idealistic young man to embark on a career in education in these times. Education is one of the most highly bureaucratised sectors in modern society. At the bottom of the education pyramid are the teachers, modestly paid, overworked, doing their best for their young charges but groaning under the weight of soul-destroying paperwork. The middle of the pyramid is occupied by functionaries who fill their hours creating that paperwork, inventing endless tests and reports for humble teachers to implement. At the top of the pyramid sit the directors-general and ministers whose appointed task it is to have grand visions of the future.

Why is it, I wonder, that education attracts so many grey bureaucrats? I have no answer. I will say no more on the subject of the educational bureaucracy. Each of you here has been through 12 years of schooling and three or four or five years of university. You know what I am talking about.

It will not be an easy road, first qualifying as a teacher (teachers’ colleges and university faculties of education are no less controlled by bureaucratic types than government departments of education), then being initiated into the routine practices of teaching, but there are two facts in which you can find consolation.

The first is that the children who will be in your care will be real people, from whom you will learn much. The more open you are to them, the more you will learn.

The second is that the supply of children for the classrooms of the nation is inexhaustible. In fact, in a country like South Africa, where half the population is under the age of 25, there are more children than anyone knows what to do with. Never in history has there been more need for hard-working, dedicated, good-humoured and loving teachers.

Say to yourselves: Let us be the generation of young teachers who will transform the schools, who will chase out the bureaucratic ghosts and make the classroom such a place of intellectual excitement that the children cannot wait to get to school in the morning.

My remarks thus far have been addressed at the young men among you. It would be foolish of me to address not a word to the young women.

Ever since women were allowed into educational institutions (which was not so very long ago), you have been the backbone of the teaching profession. As one of those unformed children who was turned into a human being by the hands of women, I address you as representatives of your mothers and grandmothers and thank you.