on January 28th, 2016 Posted By BG in Editorials
by Dr. Larry Walker 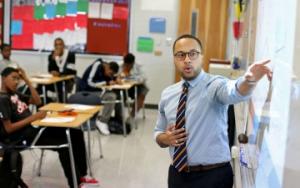 Recently, a friend sent me a YouTube video of a group of students stepping during homecoming. The video didn’t appear any different than the dozens I have received throughout the year. But after looking closely, I recognized a familiar face. One of my former middle school students was helping her sorority sisters lead a stroll. What a great feeling to watch someone you taught and mentored defy the odds and achieve a level of success. Few people watching the video could understand the trials and tribulations this young lady had to overcome.

I am sure that there are several current and former educators who may be reading this and thinking that they have had similar experiences. These are the dedicated bunch who have spent evenings, weekends, holidays, and after school hours attending athletic and academic events just to support their students.

But much to the dismay of the educational community, the nation still struggles to ensure a growing multicultural student body has access to educators who have similar cultural backgrounds. Today, majority-minority school districts (Pre K-12) and colleges and universities have failed to recruit and retain Black men as educators.

Currently, no more than two percent of educators in public schools are Black males, according to the U.S. Department of Education, while they represent a fraction of the six percent of full time professors at colleges and universities, figures from the National Center for Education Statistics say. Although some experts may argue that Black males are not graduating at the same rate as other groups we must find a way to strengthen the Black male educator pipeline.

There are several reasons why having more Black male educators in elementary through college settings is important. For instance, teaching offers committed brothers the opportunity to challenge the stereotypes that we are angry, dangerous and not willing to make sacrifices to improve conditions within the Black community. Personally, I have several years of experience teaching students from the elementary level through college. Working with students can be a rewarding experience but it is one that requires a great deal of sacrifice and commitment that can then lead to amazing results. Educators often don’t realize how much they impact their students until later in their life.

It is important to understand that this isn’t a one-sided relationship—students also give back to their teachers just as much as they receive from them. I often have conversations with my students where they offer insight on recent issues like #BlackTwitter discussions, community concerns and how to combat stereotypes. Working with students is always a mutually beneficial experience.

Unfortunately, Black male educators frequently encounter misconceptions in school settings. The Black male, as a disciplinarian, is an issue that has to be addressed in public schools with the understanding that these same men can also be supportive and caring. According to Dr. Ramon Goings, Program Coordinator at Sherman STEM Teacher Scholars Program at the University of Maryland, Baltimore County, “In conversations about the importance of Black male educators, the argument is often made that Black males should be in the classroom for their ability to be disciplinarians. However, we must move away from that deficit perspective as Black male educators have the ability to effectively teach all students.” Dr. Goings’ comment highlights how societal views have only clouded the Black male experience in school settings.

Frequently, discussions relating to recruiting Black male educators focus on Pre K-12 schools. However, there are few fulltime professors at post-secondary institutions throughout the United States. I have friends who have never had a Black male teacher/professor in their elementary through college academic experiences. Hiring and supporting (financially, socially) Black male faculty members is important because they challenge misconceptions. According to Dr. Robert Palmer, Associate Professor, Department of Educational Leadership and Policy Studies at Howard University, “Black male faculty members are critical because they serve as role models to African Americans and other men of color who may have lacked access to such individuals.” Palmer continues, “they are also important because they help to dispel the stereotype of Black men being anti-intellectual that the dominate society has created about Black males.” He believes that countering societal perceptions of Black men can only be accomplished by funding policies and programs that support efforts to recruit and retain male educators.

Increasing the percentage of Black male educators in elementary through college settings should include a dramatic increase in funding for historically Black colleges and universities (HBCUs). More than half of the Black teachers who work in public schools today earned their degree from an HBCU and so they play an important role helping Black students graduate with bachelors, masters and graduate degrees in highly coveted areas including science, technology, engineering and mathematics (STEM). While there is a dire need for more Black men in classrooms, Black women have always played a pivotal role teaching, mentoring and collectively shaping the lives of students from diverse backgrounds. For this reason, it’s important that advocates, and federal, state and local policymakers work together to ensure students have teachers that can relate to their personal and cultural experiences.

Dr. Larry J. Walker is an educational consultant and mental health advocate. His research examines the impact environmental factors have on the socio-emoitional functioning of minority and underserved communities. Follow him on Twitter @LarryJWalker2.