on February 8th, 2010 Posted By BG in Editorials
by Dawn Farrell and Michelle McHugh - 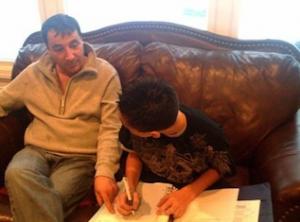 As an individual walks through the halls of an elementary school more often than not they will observe only female teachers. One may ask are there any males in this profession? If so where are they? Gender roles have changed in the United States, yet there are still very few male teachers in the classroom especially at the elementary level.

Education has always been predominantly a female profession. According to statistics from National Education Association (NEA) only 25% of our nation’s 3 million teachers are men. Researchers have found that men that are teachers would rather teach at the middle school or secondary level. They prefer to teach specific topics to a more mature and academically advanced student population compared to teaching a less advanced student population where the main focus is to assist in their overall development.

Males find it difficult to break into the teaching profession. Economically teachers’ salaries are not as high as other business professional’s. Due to gender roles and stereotypes males face added societal pressures of being able to provide for their families. Males believe that teaching will not be lucrative enough profession to support their families therefore they often shy away from a career in teaching. In fact, Annie Pleshette-Murphy states in her article that it is extremely important for families to advocate for a pay raise for educators as a whole; this could help lure more males into the teaching profession due to an increased financial security and comfort. Furthermore, she continues to mention the fact that the state of Michigan currently offers the highest salaries for facilitators and the greatest percentage of males as classroom teachers…could this really just be chance? One would most likely think not.

Although money is definitely a huge factor related to the deficit of male teachers in today’s classrooms, there are other negative societal stereotypes that tend to keep males from entering the field of teaching, especially in early childhood settings. Unfortunately, there are many people that fear the idea of males wanting to work with young children. It has been shown that many individuals judge male figures in the academic environment, especially in early childcare facilities. It is truly disheartening that a man’s motivation behind why he chooses to work with children is questioned so often. Sadly, male teachers are viewed by assumptions and judgments; they fall under stereotypes that precede them as non-nurturing individuals just because of their gender. If only families could understand the need for more men in the educational arena and put their fears and assumptions aside or discard of them completely in order to give children the opportunity to learn from both male and female educators. Alexandra Zabjek briefly introduces the fact that many people still view male facilitators as a threat to young children, assuming that just because they want to work with kids they must be a pedophile. Consequently, many young children beginning their education journey are deprived the opportunity to have teacher role models from both sexes.

In the article written by Amanda Bass, the idea of children needing a male role model in school is discussed. She addresses the fact that for many young children today there is no father-figure present; therefore, it is important for children to have at least one male teacher during their academic journey to look up to, view as a role model and learn from. However, is having a male teacher more important for boy than girls or equally as imperative?

Recent studies have shown that although a male classroom teacher is beneficial to all children, especially with an increasing number coming from single-parent homes in which the father isn’t present, there have been studies that have exemplified specific benefits to the young boys in classrooms with male teachers. Research studies from Britain’s Training and Development Agency for Schools showcase the fact that having a male teacher in the classroom for one year significantly helped build up the boy students’ self-esteem. Furthermore, the information collected concludes that aside from showing intrinsic changes in the boys in the class, the male educators company attributed to closing the achievement gap between the boys and girls in the class studied considerably.

In closing, it is imperative to begin to somehow break down the social barriers for men entering the education field. In what ways can this be done? The possibilities are endless and the studies speak for themselves. Children should be able to be taught by both women and men, while men should be able to follow their passion and pursue their love for teaching without worrying about societal stereotypes.

Questions to consider and/or research further:

1. How can society get more men into the teaching profession?

2. Does it affect the development of students not to have male teachers until middle or secondary school?

3. Should a man be questioned if he wants to pursue a career in teaching?