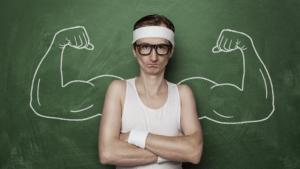 It’s been odd to hear so much concern at the news that the proportion of male teachers has fallen to its lowest-ever level.

The truth, of course, is that the vanishing male teacher should not worry anyone. Quite the reverse. Most of us are quite annoying in some way or another, and too many of us combine this with being at the wrong end of the useless spectrum – though not all, in fairness.

Frankly, we should instead be celebrating the news that the proportion of women in the profession has never been higher.

“But where are children going to get their male role models from?” seems to be the main worry. I have no idea what the phrase “male role model” even means. The thought that I might be expected to be one is terrifying indeed.

If there is such a thing as a “male role model” (and please forgive the subsequent stereotyping), then here are five good reasons why most male teachers are usually not up to the job.

Most of us have no idea how to fix anything. A fairly typical example was last Thursday, after school. A desperate colleague in the car park could not start her car, and was looking around for help with a jump start.

She caught sight of me and, handing me some black and red leads, asked if I knew how to open the bonnet of her car.

So I sat inside, eventually found what I thought was the relevant lever and gave it a firm tug. Half the casing of her steering wheel column came off in my hands, releasing a magnificent multicoloured display of wires. “It’s like discovering a surprise bouquet of flowers, isn’t it?” I said, trying to look on the bright side.

2. We’re not that great with computers, either

It’s a similar story when we are called upon to show gallantry at the keyboard. Certain assumptions are made about men and computers – often wrongly, and occasionally disastrously.

3. We don’t go on endlessly about football

A male role model is presumably supposed to be able to chat away with all the footie types in the class about the latest big game, controversial VAR decisions, Jurgen Klopp and all that. While a few of us might live up to this stereotype, many male teachers are found wanting here, too.

Again, we are sadly lacklustre here as well. No boy at school should follow the male teacher’s lead in matters sartorial. In fact, no other male in the world dresses in quite the way we do.

For one thing, most male teachers still mysteriously wear that ridiculous flight of fancy called a tie, while other professions continue to discard it. That tie accompanies a rather irksomely smart dark suit if we are SLT or SLT-minded and wish to be taken seriously. Or, alternatively, the tie forms part of a strange semi-formal, semi-informal combo of tops, trousers and footwear, unique to male teachers.

Again, we are nowhere near the mark when it comes to this aspect of the stereotype. Most of us just go home and get on with more schoolwork.

The “male role model” seems, in short, a nonsensical phrase. The really serious role-modelling at school is surely a genderless matter, and is all about signalling the value of kindness, respect, resolve and so on.

The concern in teaching should not be about the sex of teachers, but the falling number of them. That is the real ongoing crisis.