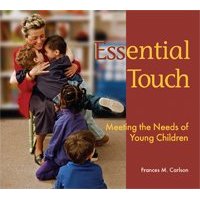 Male early childhood (EC) educators face stereotypes that portray us as potential child abusers on a daily basis. Clearly, children must be protected from child abusers, yet a principle reason many men give for not entering or staying in the field of early childhood education (ECE) is fear of being accused of harming young children (Nelson, 2002). Only at their own peril do many male EC educators offer “the intimate pats, back rubs, caresses and leisurely holding on laps and in arms that little ones need” (Honig, 2005).

Is it any wonder that men pass over our profession in favor of something less perilous, like working at high altitudes, driving at high speeds, or operating dangerous machinery? Though no-touch prohibitions are commonly imposed on male EC educators from the moment we enter ECE, many of our female colleagues are now finding this appalling legacy is being passed on them.

Recent child molestation cases involving priests was the justification given for an insurance carrier’s insistence that the all-female staff of a church affiliated EC program stop full-body hugs, allowing children to sit on their laps, or much else besides placing a caring hand strategically across back and shoulders.

Another example appears in Carlson, (2002) where she notes: “In an episode of the Oprah Winfrey show, the president of the National Education Association said, “Our slogan is, teacher, don’t touch” (p.12).

What male EC educators know, and what our female colleagues are beginning to experience, are regular institutional reminders in our pre-service professional preparations, in-service trainings, and consultations with superiors emphasizing the scrutiny we will be held to. There are the unofficial mentoring, stories, and off-hand reminders from parents and colleagues promoting the adoption of no-touch practices purportedly in “your own best interests.”

All EC educators may now have to grapple with a proposition once reserved principally for male professionals: That it would take only a serious misunderstanding to cause a career, reputation, life, and the lives of the teachers’ family to be permanently ruined. When a child naturally seeks physical comfort from an EC educator, that teacher must weigh appearances. By consciously striving to avoid any appearance of impropriety an ever-present cloud of uncertainty tarnishes even the most basic human act of nurturing a child. The children feel it, but know it only as rejection. No-touch policies are driven by modern society’s taste for sensationalism and unscrupulous media quick to capitalize on our greatest fears for children.

My own first tentative steps as a male EC educator were on eggshells, for in the early 1980’s the McMartin Preschool child sexual abuse trail was front-page-news. The recent trial of Michael Jackson on child molestation charges occurred first in the media prior to being held in the courts. As in the McMartin case, EC educators so accused still face the possibility of a trial by media, but are in far less of a position to take positive advantage of the coverage in the way Mr. Jackson could.

The societal paranoia fostered by the so called “reality” media is ironic, for these are the same media sources that Diane Levin (2005) charges with disseminating progressively narrower, ever more violent, and increasingly sexualized gender roles to children.

The gender role messages marketed to boys center on aggression, power, conflict, and most disturbingly, a direct association between male violence and sexuality.

In his article on myths about men who work with young children, Bryan G. Nelson (2004) notes that action, not suspicions protect children. It is appropriate to rationally and reasonable minimize all dangers to children, and to that end an initial FBI five year criminal history check and annual criminal background checks are required for all licensed EC workers regardless of gender.

To minimize the risks to EC professionals themselves, the field of ECE needs comprehensive safeguards from the spreading malady of no-touch policies and to reduce the potential of innocent professionals having to abide the course of an unfounded abuse accusation.

Systemic safeguards might include, but need not limited to: 1) Sweeping “Healthy Touch” campaigns that seek to normalize developmentally, culturally, and professionally appropriate physical touch in all EC programs. 2) Promotional campaigns supporting age-appropriate healthy sexuality development including endorsement of the concept to the family members we serve 3) Stronger professional recommendations for written program policies and procedures, recommended structural modifications, and proper staff training to strengthen these protections.

Although the NAEYC Prevention of Child Abuse Position Statement item #6 (p.2) states “Programs should not institute “no-touch” policies to reduce the risk of abuse,” NAEYC could disseminate influential books on the subject – perhaps as NAEYC comprehensive membership benefits – and publish articles on exemplar environmental modifications, family involvement practices, community resources, and professional references on the subject.

We need prominent and open discussions on the impact of no-touch and the consequences of modern electronic media policies moved up to the professional, familial, and policy front burner. Those EC programs with written policies, clear boundaries, and proper training on healthy touch, typical child sexual development, and child abuse prevention face fewer accusations of abuse than programs with little or no guidance. With fewer accusations, our profession will be a far more attractive and safer career choice for all caring adults.

Levin, D. (in press). So sexy, so soon: The sexualization of childhood. In S. Olfman, (Ed.), Childhood Lost: How American Culture Is Failing Our Kids, Childhood in America Series. Westport, CT: Praeger Press

Nelson, B. G. (2002). The importance of men teachers: And reasons why there are so few. MenTeach.org. Minneapolis, MN.