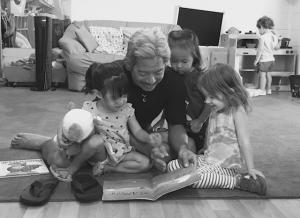 When I first started working with infants and toddlers the last thing I was thinking about was being a role model as a male teacher. All I was trying to do was just to survive every day without making too many unintentional mistakes. I did not like making mistakes and tended to avoid situations that displayed my incompetence at a particular teaching skill. I am fairly sure that my avoidance of these stressful situations was not necessarily a good strategy for exploring the positive influence I might have on others. Making mistakes is never fun but it is how you learn. I now am attempting to seek out challenging teaching options for the future in the hope that those experiences might help me to learn something new and become a better teacher, husband and father.

Being a male teacher in an age group that has traditionally had very little exposure to men was very challenging during my first couple of years. However, even during my most embarrassing moments as a volunteer and teaching assistant, I kept meeting people who kept telling me that I was a great role model for all the families I worked with. At first I was very uncomfortable with these strong opinions. I doubted that I was as influential as everyone thought. My experiences with my own daughter as her father and teacher have changed my opinion about everything. I am now much more comfortable with the responsibility that comes with being a male role model for others.

During my first year as a teacher my wife unexpectedly announced that I was going to be a father. I experienced a strange combination of excitement and fear at the realization that I was actually having a child and not just imagining what it’s like to be a daddy. I did not feel ready at all. This was definitely not the plan my wife and I discussed when we eventually decided to have kids. I was transitioning into a new career at mid-life and was concerned that having a child at that moment was not necessarily the best thing. I thought if I had more time to prepare I’d feel more confident about being a father. At that time I didn’t feel ready to be a role model for anyone. I was wrong. I was more ready then I thought, I just needed a little help.

The birth of my daughter Kealani was truly one of the greatest moments in my life (everyone calls her Kea). My experiences with her as a father strongly influenced my development as a teacher. Kea is now 14 and officially a teenager. She attended my infant/toddler classes I taught as a Parent Educator and helped me a lot as a volunteer as she got older. Kea now obsessively loves to volunteer as much as she can at The Early School where I currently work. She has always loved infants and toddlers.

This is her 4th year spending most of her school breaks with me at work. I’m so amazed that one of my daughter’s favorite things to do when she is on break is to come with me to work with me instead of staying home. It must be very challenging going to work with your father when you have to do everything he says whether you agree with him or not. Especially if you’re a teenager.
Kea thinks my kids are the cutest things on earth. Every year she gets attached to a new group of toddlers. We talk about them every day. Her love for the children I work with continually reminds me of how lucky I am. My daughter is right, the children I work with are truly “the cutest things on earth”. Honestly, sometimes, I forget that. I spend so much time with them I don’t always appreciate how remarkable they truly are.

That’s why I love when Kea comes to works with me. My daughter’s perception of my life as a teacher greatly influences my appreciation of the kids I work with. Not only does Kea love the kids I work with, but she knows all of them almost as well as I do.

We have philosophical and developmental discussions about all the children in our program and every significant event that happens at my school. She also has close personal relationships with many of the kids and families that I work with both past and present. This was something I never saw coming. I continually appreciate all that I learn as a result of these deep, random conversations.
Recently while watching a movie about a father who abandons his young children Kea asked me about my father. Of course I told her the truth. My father also left me and my brother when I when we were very young. The movie highlighted what a boy says to his father about being abandoned as a child. After the movie Kea asked me how I felt about my dad. She asked me what I would say to my father if I ever meet him. This was kind of a heavy question and at first I really didn’t know what to say. However, my response did come easier than I thought.
I was honest, I had thought about it. I told her that I wasn’t comfortable with the fact that he left myself, my brother and my mom. However, I was also sure that I did not know all the details of what actually happened. I’m sure he had his reasons, but not attempting to connect with his young children and not paying child support for so long was is difficult for me to accept without being a little resentful. I told her if I talked with him I’m not sure he would appreciate my feelings about how we struggled without him or how his absence as a father affected me as a young child.
However, I also explained that I was sort of grateful that he did leave us. His absence had an obvious positive impact on my values for everything that I now. I’m sure it wasn’t purposeful, but it did provide me with a parenting standard that I knew I didn’t want to achieve. I knew I could do better. I am fairly sure that I would not have been as good of a husband, father or a teacher without his absence. As I attempted to share my feelings about my father’s influence I thought it might be too much for my young daughter to comprehend. However, not only did she understand my feelings but after hearing my thoughts about my own father, Kea blurted out “Hey, that’s why some of the children in your class like you so much and are so attached to you!”

I totally was not ready for that statement. She kept asking questions and we had the most incredible discussion about why we both like infants and toddlers. We then talked more deeply about why young children love playing with men. Unbelievable conversation that I will never forget. Because of her I now truly appreciate being a role model for infants and toddlers. I love the influence I have on the young children I work with. My daughter clearly recognizes my influence and that continually motivates me to be a better teacher.

This year my influence as a male teacher seemed especially obvious. I happen to have 3 single moms in my room. Their children all seemed to really get attached to me quickly. I kind of knew it was because they all did not have a consistent male influence. One day while I was opening our classroom, a mother of one of the boys thanked me for being a great male role model for her son. She was very specific and personal about why she thought I was a good influence. It was amazing. I actually took the compliment well. I told her it was a pleasure helping her son and that I take that responsibility very seriously.
That was a very unusual reaction for me. Usually when a parent compliments me like that I shut down and am overly humble. However, this time I knew she was genuinely expressing her feelings about her son and I truly appreciated the compliment. I could tell that her son liked me and I enjoyed providing him with the comfort that I needed. I was confident that I did help her son deal with the absence of his father and I gratefully accepted her feelings. That experience helped me to feel more comfortable about the positive influence I have on the children and families that I work with.

It is so weird talking deeply with my daughter about why being a male teacher is so important for infants and toddlers. It is also amazing to see her process this information. My daughter is a typical teenager. Kea often does not seem to respect my opinion on pretty much everything. It’s not purposeful but my daughter rarely listens to me when I am talking to her. However, she does seems to listen intently every time I talk about the kids at my school. Kea also loves to analyze them like I do and she does respect how well I know them all.

I love that my daughter continues to come to work with me instead of sleeping in, being spoiled by her grandmother, zoning out on her phone, or spending time with her friends (all of her favorite things). Her influence continually helps to reminds me how lucky I am to work with young children. I know Kea will always love the kids I work with and be as involved as she can be as she gets older. This is something I never saw coming. I initially brought her to work with me so I could spend time with her. Now it is much more than that. I have no expectations for the future. Kea you are the best daughter ever and I love it every time you come to work with me. Thank you!