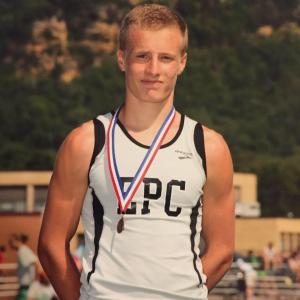 I am a junior at UW-Stout and I am from Plum City, Wisconsin. Plum City is a small town southwest of Menomonie and has less than 600 residents. I have two siblings; an older brother who is a Physical Education teacher and a sister who is in her senior year at UW-La Crosse. I am in the early childhood program (ECE) because I am drawn to teaching and love to work with children and watch them grow.  So far, my experience of being one of just a few males in the ECE program has been interesting because of the few number of males in my classes. I am usually only one of maybe two men in classes that appear to be aimed more towards the females. This could be due in part to the three female faculty members in ECE and no male faculty or instructors.

Along with being in the ECE program, I am a member of the UW-Stout track team. Being on the track team is fulfilling for several reasons. First, as a team we have the overarching goal of going to nationals and being nationally ranked. Secondly, being a runner allows me to set personal goals such as setting the school record in the 800m run. Finally, being a member of the track team provides opportunities to create lifelong friends. While being on the track team is fulfilling, I realized the importance of belonging to something professionally. Therefore, I joined Men in Education Student Organization. As a member of an organization, I see similarities to the track team in that both groups work toward a common goal, each member has individual goals, and there is a connection to the community.

The UW-Stout Men in Education organization offers a great opportunity to meet others that have the same desire to become a teacher. There have been many events the Men in Education organization has participated in around the community including collecting mittens to fill the Mitten Tree around the holidays, weekly Thursday Table which is a dinner sponsored by a community church, and a family weekend beanbag tournament.

This year our organization discussed being a part of a larger project that could help a community as well as giving us, the members, experience and professional connections. The decision to “Adopt a School” came out of a discussion held during our first meeting of the year. The main idea involved finding a school district that would allow members of the men’s organization to actively participate in while assisting teachers with their classroom and student needs. I was very interested in this ‘Adopt a School’ concept so I suggested we use my former school district, Plum City Schools. I thought this would be great because of my connection with the principal ( I mow his lawn) but also because my grandma and brother work for the district. One other advantage is that Plum City Elementary is less than 35 minutes away from UW-Stout which makes travel easy for our members to help in the school and get back to campus for class.

The Men in Education meeting invited Michael Kennedy, the principal of Plum City School District, to speak to our October meeting to further expand the idea. Mr. Kennedy had been in contact with the teachers in Plum City and shared what teachers thought they could use male student’s assistance with. The list included teachers from the Pre-K, Kindergarten, 1st, 2nd, and 3rd grade classrooms which parallels with our teacher license. As a group, we wanted to make our efforts different from the other education organizations throughout campus that have ties with the surrounding school districts. These groups often focus on assisting with reading events. After brainstorming ideas with Mr. Kennedy, it was decided that our group efforts would focus on helping children with math. We look forward to this endeavor and currently are collecting names of students interested in being a part of the Adopt a School program.

Being from the small town of Plum City which is home to less than 600 people I know how important our school is to the community. A referendum was passed this past year which shows that education is important to this community knows education is. Having this relationship between UW-Stout and Plum City will not only help the members of our organization get experience, but also gives Plum City a shared practice with UW-Stout.

I feel this experience will help me grow in learning new teaching methods and getting experience in the school and in the end, help me become a better teacher. As Vice president of the Men in Education Organization, I feel our members are very fortunate to have the opportunity to work with a school district so passionate about education and anticipate the success of the Adopt a School.