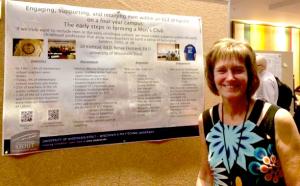 [MenTeach: Dr. Jill has been working to increase and retain men in her education program.]

In my family, I have five sisters and two brothers. Growing up, there were many times that we would exclude our brothers from our play and enjoyed making signs which read,  “no boyz allowed’. That same mantra followed throughout my elementary years at a Catholic school and continued when I enrolled in a convent for my high school years.  How ironic that today, so many years later, I find myself the advisor of the Early Childhood Education Men’s Organization. Certainly, I have dispelled my  ‘no boyz allowed’ chant as I find myself advocating and supporting ALL BOYS ALLOWED, especially in Early Childhood Education.

Those of us, who are agents of change, recognize the important role men play in the lives of young children, as we are acutely aware of the 2014 statistics that only 2.8% of males teach at the preschool and kindergarten levels.  We also embrace the fact that change will occur when critical mass is built to support this important change. Critical mass is defined as the minimum size or amount of something required when starting or maintaining a venture.

Recently I returned from presenting at the Association for Childhood Education International (ACEI) conference on efforts to recruit and retain men in early childhood education.   The questions most frequently asked were,  “how do you do it?”  and “how have you grown your program from five to eighteen men?”   To be truthful, I am unable to come up with just one definite reason, however if I focus on the intent to build critical mass, it seems easier to explain.  I will forever be grateful for the one young man in our early childhood education program that suggested and insisted we create a Men’s organization on campus two years ago that began our efforts to build critical mass.

From my experience as the advisor in the MEN’s organization I have identified specific habits of mind when building a critical mass of men who will recruit and retain more men into the field of education.

Patience-Building anything from the ground up takes patience. Building the Men’s organization involved recognizing that not all things go as planned and allowing events to unfold is key to achieving success. Patience includes letting go of the thought that you or any one person can control everything and instead working to accept things as they come.

Vision-The vision must be in line with what is best for the group as a whole and for individuals committed to the group. This habit of mind seems relatively easy being a classroom teacher, but it’s also a challenge because the vision must be  ‘shared’ and articulated by group members as a whole.

Time– Often, I have had to remember that Rome wasn’t built in a day and neither would any organization or the critical mass.  In addition, there is incredible time and energy that goes into this endeavor however; the rewards are great when the group gathers together to identify the goals and activities that will make a change.

Connection– Connecting with one another and to a larger entity is crucial in sustaining and building a critical mass.  People need to be connected on a local level as well as nationally and internationally.  The Men’s organization has worked within the university community by teaming up with other student organizations. They have also connected with the City community through their efforts of the mitten tree project, working with the Boys and Girls Club, cleaning up after meals served at a local church, and presenting at local conferences.  Nationally and internationally, the group has been connected with others through menteach.org, and attending the National Association of Education of Young Children (NAEYC) conference Fall 2016. Through the use of social media, especially Facebook, the men’s group is connected
globally to  The MENtor Program for Males in ECE and MenTeach-New England. These connections are significant as a means to share experiences of other men in early childhood, in providing articles that support men in ECE and ultimately to support each other in recruiting and retaining men in early childhood positions.

Leadership-Finally, an organization must have strong leaders who can facilitate, support and celebrate the efforts and accomplishments of the group.  The leaders convey enthusiasm and eagerness to increase momentum in the effort to make a difference and fight for change.

Alliance -I have reflected upon the point in my life where my view regarding ‘no boyz allowed’ changed. This change occurred when relationships were built with strong men who served in the role of teacher and mentor.  My father, my first teacher, taught me how to be honest and inclusive especially to my brothers. Then I would identify my very first principal, Mr. Chojnacki, who believed in me as a first year teacher and hired me for my first job. His unending support my first year of teaching continues even today.  His level of knowledge, his way of thinking and insight changed my attitude of “no boyz allowed”.   Throughout the years, it’s been a privilege to work and align with male colleagues, who sustain me in my work with men in early childhood education but more importantly support the efforts to continue to build critical mass that says, YES, BOYS ARE WELCOME!