on April 24th, 2011 Posted By BG in Editorials
by Michael H. Cottman - BlackAmericaWeb.com 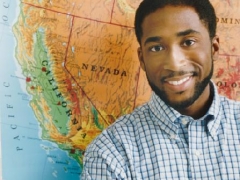 U.S. Secretary of Education Arne Duncan is on a mission: He wants to tour several historically black colleges and speak directly with African-American male students about teaching in the nation’s public schools.

It’s a bold and unprecedented initiative – and comes at a critical time for black America.

Consider this: Only 1.7 percent of the nation’s 4.8 million public school teachers are black men. Most black boys may never be educated by someone who looks like them, and sadly, some African-American boys will never experience a black male role model in their public school classrooms.

“And people ask why black males are struggling,” Duncan said in a recent interview. “I’ve talked to the first lady about it. I plan to visit black colleges and talk to freshmen and sophomores. I want to talk to them about a call to service.”

One of Duncan’s first opportunities to speak with black students will be at Xavier University in New Orleans, where he is scheduled to speak in May, his aides told BlackAmericaWeb.com Thursday.

Duncan’s plan to persuade young black men to teach for a living after they graduate college is an important initiative for the African-American community and may even silence some Republican critics who claim President Barack Obama has no fresh ideas.

Duncan’s idea is not only innovative; it’s also sound leadership.

He deserves credit for being forward-thinking, and it all starts with Obama, who urges Duncan – and other Cabinet members – to think outside the box and to brainstorm in unconventional ways.

This certainly qualifies for unconventional. When is the last time a presidential Cabinet-level member walked onto a black college campus to ask black male students to teach in inner city schools?

Let’s face it: The public school system has failed black males. The graduation rate for African-American boys is abysmal; many black male students drop out early, and they are expelled at a much higher rate than white students. Black boys make up nine percent of public school enrollments, but 20 percent of those identified as mentally challenged.

Some black parents voted for Obama, in part, because they were hoping he could reform America’s troubled public school system and help improve the quality of education for black males.

Obama has made education a top priority during his tenure, and although he has not specifically discussed the issue of black males directly, he has instructed his senior staff to address the myriad of problems facing black public school students.

So the Obama administration should take Duncan’s idea one step further. If there are black college students interested in administrative opportunities in public schools, then government should find ways to help them finance their advanced studies that are necessary for jobs as principals and top managerial positions.

But first Duncan must deliver a convincing sales pitch. Teaching in public schools, especially in urban centers, can be tough work.

Take Detroit, for example. Officials call many of Detroit’s overcrowded and worse-performing schools “an academic crisis.” Textbooks have arrived nine months after the first day of school. Many students come from poor families where parents are not involved in the educational process. Teachers are overwhelmed and dealing with students who have been abused and neglected, and some teachers have been attacked by out of control students.

Public school teaching is not for everyone, but Duncan’s plan is solid and worthy of praise. America needs more African-American male teachers – 1.7 percent is troubling. And it’s not just about numbers, but also what black male teachers offer: Positive images for black boys. They help motivate black males to reach their full potential, they teach them to respect black women and help promote healthy and …..

And so Duncan will travel on behalf of America’s first black president to ask black male students at Xavier University and other black institutions to move to cities like Detroit, Milwaukee, Chicago and Cleveland to teach the next generation of young black men who  need inspiration through positive black role models.

It’s certainly worth the trip.