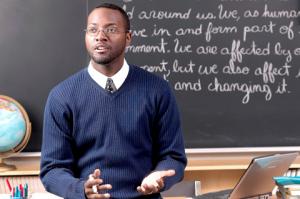 “Fewer Male Instructors Now Entering the City Public School Service” read a headline in The New York Times in March of 1912. Its first paragraph stated: “There is unmistakably a scarcity of men among the teachers recently appointed, or to be more accurate, among those who have accepted appointment. The explanation is simple — men are unwilling to accept the initial salary, $720 a year, now paid in the elementary schools.”

Fast-forward nearly a century, tack on a pay raise of at least another $40,000 to start and yet variations on the same story continue to appear in newspapers around the U.S.A. National Education Association study completed in 2003 found that 24.9 percent of our nation’s teachers are male, and that figure drops to 9 percent when only elementary school teachers are counted. (Men accounted for 35 percent of secondary school teachers.)

Fewer than 9 percent of my son’s elementary school teachers were men. In fact, all of his teachers from pre-K through grade 5 were female, with the exception of his physical education teacher. In middle school, the gender gap narrowed a bit. My son is from an intact family and has a close relationship with a very loving and attentive father.

However, I believe learning from those men gave him additional role models and ideas about what it can look like to be a knowledgeable, organized, creative, firm, sensitive and funny kind of guy. Although a recent brief by Shaun Johnson (Center for Education and Evaluation Policy, Winter 2008) says it is not clear that the gender of a teacher influences students, I know that in middle school, all of Jake’s favorite teachers were male.

Usually, what he liked about them was the way they kidded around with him, sometimes teasing him — not enough to offend, but just enough to make him feel like “one of the guys,” modeling what Johnson refers to as a “healthy type of masculinity.”

Could Jake have received the same education if his teachers were exclusively female? I don’t doubt it, but I would hate for him to have been deprived of teachers “who look like him,” the same way many of my minority students never see a teacher who shares their background.

I think it is important for children to know they can learn and grow when they are led by teachers of both sexes and all backgrounds. The world is a diverse place and having only one type of teacher doesn’t reflect the larger reality. Boys and girls benefit from having male teachers.

While many of our students may view their female teachers as surrogate mothers, usually there is a mother at home. Our male colleagues may be the only influential or caring men in some students’ lives. Yet, their numbers are decreasing.

What is keeping men out of the classroom? Johnson writes: “Teaching’s association with care, nurturance and domesticity firmly places the profession outside the normative boundaries of what are acceptable masculine practices.

Challenging such boundaries leads to negative scrutiny within larger society, and many men are therefore reluctant to work with children.” How sad is that?

Other factors keeping men away from the classroom included the perceived lack of prestige and the pay. In fact, even men who become educators are susceptible to the lure of the administrative degree with its increased compensation and prestige. So many very good male teachers leave the classroom, in spite of their competence and success.

To all my male colleagues and to those men considering a career in teaching: This is a rewarding and wonderful profession. It is hard work and intellectually challenging, yet the salary is not bad — certainly, many men have jobs making less — and the intangibles are exceptional. Seeing a concept “click” for a child as a result of your efforts is an addictive experience. Stay in the classroom. Real men teach kids.