on May 19th, 2014 Posted By Bryan G Nelson in Editorials
by Mario Shaw - Charlotte Observer 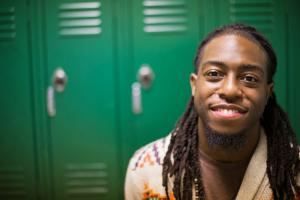 Mario Shaw is a 7th grade teacher at Charlotte’s Ranson Middle School and a Teach for America product. With the 60th anniversary of the landmark Brown v. Board of Education ruling this Saturday, Shaw wanted to reflect on where things stand today on inequalities in public education.

Perhaps his most important point: Black males make up only 2 percent of U.S. teachers, leaving very few role models for many of the nation’s struggling youth.

This week marks the 60th anniversary of Brown v. Board ending “separate but equal” in education. As a seventh grade teacher, I look forward to discussing the occasion with my students. As an African American man – part of just the 2 percent of American teachers who identify as black men – the topic hits home.

In ending legal segregation in school, the justices aimed to bring America closer to its unfulfilled promise of educational opportunity for all. Six decades later, that victory has been partial, at best. Our schools remain deeply segregated by race and income, with opportunity gaps to match.

The inequalities driving these disparities are complex and deep. But that doesn’t mean we’re without hope. With all the challenges, my work in the classroom leads me to believe in what’s possible. This begins with ensuring we’re developing a teaching force as diverse as the students we teach.

As a teacher, I’m responsible for ensuring that my kids thrive academically. But as an African American male teacher – one of just a few at my school – my responsibilities don’t end here. Many of my students have never had a teacher who looks like them standing at blackboard. Depending on their family situations, some have literally no black male role models in their lives.

In this reality, the choices I make carry incredible weight – from the way I dress, to how I handle an argument. The pressure can feel overwhelming at times. But I’m proud to have it on my shoulders.

We need to encourage more black men to lead in the classroom. My own decision was informed by my experience in school. As hard as I’d worked to get there, I arrived at college behind. As the first in my family to go to college, I had to look beyond my immediate network for help. During this time, I volunteered with the Upward Bound program, where I supported 15 black high school boys and began to recognize the importance of mentorship. From there, I joined Teach For America, an organization committed to taking concrete steps to draw more African American male educators to our highest-need classrooms.

Having regular access to teachers of color makes a difference for my kids. Every day, as we read and explore, I contribute to the breaking down of the powerful stereotypes about my identity. As a successful, educated black man, I offer a counter to the media’s portrayal of violence and victimization. Now, we must work to inspire more black men to teach, offer targeted supports to those who do, and celebrate the proud contribution these individuals make with students who deserve the inspiration needed to take the world by storm.