on February 29th, 2020 Posted By BG in Editorials
by Alan Chazaro 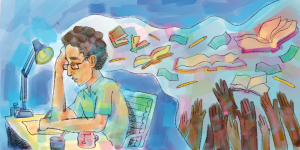 I had never taught Tatiana before. Yet, after a Latinx student meeting in Oakland, the 12th grader unexpectedly embraced me, sobbing: “You’re the first Mexican teacher I’ve seen at this school; I just wanted to say thank you.”

Translation: I’ve never seen someone like you in a position of academic importance.

I understood Tatiana. In my years as a student in Bay Area schools from kindergarten through high school, I only had one male teacher of color amid a stampede of mostly white women. This isn’t just a Bay Area problem, of course. My nine-year teaching career has allowed me to work with hundreds of diverse students from Louisiana to Massachusetts to California, but despite mostly Black, Brown, and Asian student populations, I’ve never worked with a male teaching colleague who was a person of color.

Sure, I’ve worked with counselors, student behavior specialists, security guards, custodial staff, gym teachers, visiting artists, and other employees who were men of color. But never a full-time academic teacher.

We do exist, just in alarmingly low numbers. The San Francisco Bay Area, along with every other district in the country, reflects our sad reality: The U.S. Department of Education reports that nationwide, Latino and Black men each makeup only 2% of teachers. (If our current education system were given a test, we would score a zero in this category.)

I’ve met other young male teachers of color, but usually at national conferences and workshops. Without fail, we gravitate toward each other in those moments. But even then, most of those I’ve gotten to know in those settings have left or been pushed out of their teaching positions — whether due to low pay, feeling isolated, experiencing discrimination, or burning out. Or even worse, being targeted: Recently, a friend of mine — a former History Teacher of the Year who has been lauded for promoting social justice and racial equality — was essentially forced out of teaching at his school after a series of racially charged incidents between him and other staff.

And I can’t help but wonder how many Tatianas are left crying at the departure of him and teachers like us.

Now, at age 33, I’ve made the painful decision to leave teaching after a decade of embracing the minute-by-minute struggles, triumphs, celebrations, tears, and chaos of a high school environment every Monday through Friday — plus Sundays, which have been ritualistically set aside for lesson planning, grading student work, and responding to parent emails.

It was my dream to become a Language Arts teacher, and I was proud to achieve it. But while the work has been rewarding, I simply can’t afford to do it anymore. Over the past 1,620 workdays, each moment has demanded intense energy and unimaginable amounts of time toward providing my students with a meaningful experience — only to be underpaid. So, after finishing my school year, I decided to leave the U.S. and work as a freelance writer in Mexico, and the balance of work and life has been something I couldn’t have ever imagined as a teacher.

Not shockingly, an ABC report recently found teaching to be the fourth most stressful job in the U.S. — behind police officers, military servicemen, and parenting. This amount of work and commitment wouldn’t be so problematic if teachers gained respectable wages. However, to live and teach in a city like Oakland means you must settle for a disrespectfully low salary. In fact, according to a National Council on Teacher Quality report, Oakland’s teacher wages are among the poorest in the country, while simultaneously demanding one of the highest costs of living (the city ranks as the third-worst rental market among major cities).

This helps explain why 70% of new teachers in the district leave within five years and why most men of color I grew up with haven’t considered becoming teachers here — and never will.

Why should we continue to teach in a region that egregiously undervalues our worth? I’m not seeking sympathy — although, financial recognition would be welcome. I’m asking for solutions, for accountability, for upheaval, for change.

I became a teacher because I cared about the future of our youth; I felt it singing through my blood as a struggling community college student who transferred to UC Berkeley hoping to make a difference. I stayed in the classroom despite shitty pay because, like so many other teachers, I wanted to do my part. But even that couldn’t keep me in this role I truly loved.

If I couldn’t last doing this, I worry how many other young men of color will be broken and disillusioned by teaching in our modern world.

We shouldn’t ask people to teach despite everything stacked against them; we should provide a healthy quality of living and reward those who are dedicated to educating their communities. And if we can’t, it’s a problem we all need to start caring about. It’s not simply the teachers’ burden to carry anymore.

It’s going to be a problem for students like Nirael, who would regularly tell me: “Mr. Chazaro, I only came to school today because of your class.” Or Brandon, who called me years after his graduation to say “Bro, the way you pulled me aside and talked to me all the time really changed my life.” Or, when Josue broke down in tears after class because he never had any adult he felt he could relate to.

The stories go on. Young students I have loved, and some who have loved me back, in a way that I feel privileged to have earned. I haven’t been a perfect teacher — far from it — but I have made sure that, at the very least, my students, regardless of their backgrounds, could find a glimmer of trust, hope, happiness, help, consistency, and humor in my classroom.

Our presence as men of color is necessary, especially for those hard-to-reach kids who walk into our classes expecting to see another white authority figure, then see someone who they could consider a peer.

Let me be clear: I don’t think male teachers of color are supermen magically capable of transforming student outcomes simply because of our skin tone — I’ve met tons of amazing, loving, thoughtful and capable teachers who weren’t POC men. But I firmly believe that through our innate lived experiences as men of color we are able to offer a unique kind of connection with certain students who see themselves reflected in us, who might find confidence and comfort in our presence, and who have been historically underrepresented and invisible in schools where they have never seen themselves in front of the class sharing lessons.

Male teachers of color provide researched benefits to the students we serve, including higher graduation rates, lower drop-out rates, and more interest in going to college. It also allows more room for white students to learn to talk about bias and racism as well.

We’re failing horribly when the few, dedicated men of color are leaving our classrooms, or worse, when they are being silenced. This is nothing short of a crisis. Critical rethinking in how we recruit, pay, and retain male POC teachers is necessary, and it begins with valuing us for what we’re worth. If not, we’re simply allowing the same dysfunctional systems to persist in the Bay Area while celebrating how progressive we are. It’s a lie I was no longer willing to pretend living, so I left. And until we begin to fix it, I’m gone.