on July 30th, 2016 Posted By BG in Editorials
By Beau Lancaster - Chalkbeat 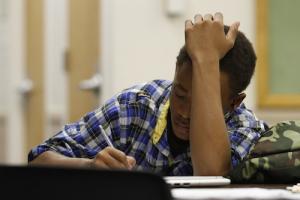 A few months ago, I helped teach a lesson about gender assumptions in the workforce. My students brainstormed a whole list of male-associated jobs: construction worker, bus driver, engineer. Not one suggested teacher.

It didn’t matter if the classroom was predominantly female, male, freshmen, upperclassmen. The answer always implied the same: I, a black man, wasn’t supposed to be in the classroom.

Currently, of New York City’s 76,000 teachers, less than 7,000 are men of color. As New York and other districts across the country work to more recruit men of color, they must also think about how they can offer them significant mentorship and emotional support. My experience shows why.

For one, it’s isolating. The profession is majority white and female, and nationally, only about 2 percent of teachers are black men. Working in these spaces, you can feel rarer than a unicorn. You’re alone in your experiences, and then feel the pressure to represent all of black America at once. Often, that means you’re expected to be “the street whisperer”: someone who can translate the students’ experiences to others.

When you don’t fulfill those expectations, it can lead to an environment where microaggressions are the norm. A former colleague once told me they were surprised I was from the South Bronx because I didn’t “act like it.” The conversation left me angry and disillusioned with a colleague who could have been a source of support.

Second, there is pressure to uphold an image of black masculinity. In both of my educational roles — as a student advocate at the Harlem Children’s Zone and now as a trainer with Global Kids, an organization that helps develop young leaders — my male students of color gravitate toward me. But the pressure to “code switch” is constant.

I was once helping a student for their first job interview. As I suggested questions and terms to use, the student said, “This is easier for you. You always sound white.” Although I knew the response was just the student’s reaction to anxiety, it was representative of the prism I operate within.

The simple reality is that I am confronting racism daily, and that’s an incredibly intense experience that you can’t understand unless you’re doing it. Racism still lingers in the school systems where we work. We experience it in our professional trainings and while communicating with colleagues and supervisors. It’s something that comes up with students, too. I see my role as an educator partly as preparing students for dealing with brutal, racist systems.

As a black male teacher, black male students share their hopes and their inner trauma with you, and you feel an obligation to make sure they succeed. The students you can’t help stay with you. They haunt you. How do you process these experiences when you don’t have black male supervisors or fellow teachers?

What can help keep black male teachers in the classroom is making sure they have great mentorships that allow them to process those experiences within safe spaces. One of the biggest sources of support I had as an educator was my first supervisor, a black man. His example showed me how to navigate such a system and not be overcome by it.

New York City is moving in the right direction with NYC Men Teach, which aims to recruit and support more men of color. Districts need to continue to increase their efforts to make sure those new teachers get connected to current and former black male educators. Building cross-school connections to decrease that isolation, adding bias training to address persistent racism, and increasing the number of panel discussions or workshops that allow us to speak to our experiences would help, too.

Diversity in the teaching workforce benefits everyone, and our students most of all. We help shape students who can grow up understanding that they can become anything — a lawyer, doctor, construction worker, president, or, hopefully, teacher.

Beau Lancaster is a educator working as a Global Kids trainer teaching, writing, and developing a civic engagement and emotional development curriculum. Follow him @LancasterBeau.