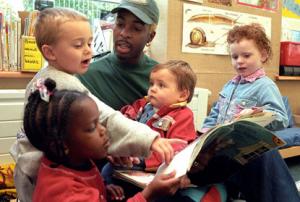 Almost all parents would be happy for their children to be looked after by male nursery workers, new research shows.

There has been a “sea change” in attitudes since a survey six years ago found that only 55 per cent of parents accepted the idea of men working with their children.

The latest study, carried out on behalf of the major day nursery groups, found 98 per cent of mothers and fathers were in favour of men caring for children between the ages of three and five. Currently, less than three per cent of nursery staff are men.

Neil Leitch, chief executive of the Pre-School Learning Alliance, said: “Parental attitudes have long been held to be a barrier preventing men working in childcare. Our survey suggests this is no longer the case. The vast majority of parents and female childcarers want more men as trained professionals.”

He said many men do not work in childcare because it is low paid and seen as low status. James Tweed, of the alliance, added: “It is felt there has been a sea change in society. Parental roles have become more equally divided in the home with men taking on more responsibility. There is a feeling it should be reflected in the sector.” This week ministers published a document saying they wanted to tackle gender imbalance in the early years sector.

But Carol Edmonds, managing director of childcare provider Bright Horizons Family Solutions, said: “Until there is a fundamental rethink about the status and value of those already working in the sector, it is unlikely we will get many more men in childcare, even though this is what parents want.” More than 1,000 parents and 700 staff were questioned for the latest poll.

In 2005 a survey by the Children’s Workforce Development Council found 55 per cent of people wanted men to work in nurseries.

‘With a man in the job you get a different perspective’

Wayne Robson, 43, below, has run a parent and toddler group in Croydon for 10 years. He has three children and is a househusband, with his biochemist partner the main breadwinner.

“I was brought up in children’s homes and foster care and wanted to give children the upbringing I didn’t have,” he said.

“When the toddler group I went to was threatened with closure I offered to run it. At first people didn’t trust me. At the time there was a lot of hype about paedophiles. I got a woman to help run it and it worked really well. As parents get to know me they keep coming back.

“With a man you get a different perspective. When children are misbehaving and I say something they stop immediately.”

“I’d absolutely recommend this job to men. You won’t get well paid and you won’t get recognition, but if you have a lot to give, it’s a good place to start.”