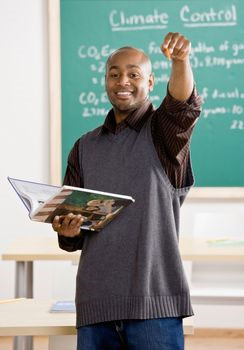 Many media sources have propagated the view that black male teachers are “becoming extinct.” Currently, black males represent less than 2 percent of the nation’s teacher workforce. One article suggests that black males are underrepresented in the teaching profession because they prefer to pursue more lucrative careers. The article also postulated that because black males have had negative educational experiences, they are less likely to choose a career in education.

What are the consequences of black males evading a tacit moral obligation to teach? Several years ago, CNN suggested that placing black men in the classroom could be the answer to solving problems in the black community such as gang violence, high school dropout rates and fatherless homes. According to most reports, the lack of black male teachers results in abysmal deficiencies in the educational progress of black male students.

Later this month, Chance Lewis and I will release a book titled “Black Male Teachers: Diversifying the United States’ Teacher Workforce”. In the book, we suggest responsible methods of increasing the number and capacity of black male teachers, without subjecting them to differential standards of success. For this entry of Show Me the Numbers, I examine the myths used to explain the shortage of black male teachers, and why the purpose of diversifying the nation’s teacher workforce should be to benefit the teaching profession, not individual students.

Black males are not avoiding the teaching profession because they are less altruistic and more interested in lucrative careers.

Reasons for the shortage of black male teachers are diverse and nuanced.

Interestingly, an upward-mobility advantage within the field of education also appears to reduce the number of black men in the classroom. Almost 7 percent of black males with a degree in education become educational administrators, compared with 5 percent for black females and white males, and only 2.8 percent for white females.

If current trends in occupational choice stay the same, as more black men enroll in and graduate from college, that will naturally increase the number and percentage of black male teachers, with complementary increases in black male physicians, lawyers, engineers, nurses, bankers, brokers and other professions.

No evidence suggests that increasing the number of black male teachers will eliminate the achievement gap.

In the 10 metro areas with the largest number of black people — New York City, Chicago, Atlanta, Washington, D.C., Philadelphia, Detroit, Houston, Los Angeles-Long Beach, Dallas-Fort Worth and Baltimore — Baltimore has the highest percentage of black male teachers, with 5.4 percent. Los Angeles and Detroit have the lowest, with 2.3 percent. Notably, all of the large metro areas with a large black population had a percentage of black male teachers that was higher than the national average.

The U.S. needs a teaching force that is drastically more diverse to represent the current demographics of the pre-K-through-12th-grade student population. The disproportionate number of black students who are suspended, are placed in special education and do not graduate with their cohort suggests problems related to equity and inclusion in U.S. educational systems. Diversifying the teaching force could address underachievement among black students; however, the solution will not be realized through race matching of teachers and students.

Recently, after an edict from U.S. Secretary of Education Arne Duncan, the media began to romanticize the idea of having more black male teachers. We understand that role models are important, and black male teachers are in a strategic position to interact with black male students five days a week. However, recent media coverage of the lack of black male teachers has led to many misconceptions and misguided policies.

Also, educational administrators should enforce the policy that every teacher, regardless of race or gender, is prepared to teach any student. White female teachers especially, as the profession’s majority, should gain the tools of cultural competence to serve any student regardless of racial background or gender.

Increasing the number of black male teachers is important, but as a minority in the teaching profession, they should not become props for shortcomings in the educational system. Beyond incidental connections with individual students, black male teachers can serve as models and mentors to novice teachers of all races.

The presence of black male teachers at a school can help other teachers realize the potential of their black male students and clarify any misconceptions these teachers may have about the black community. Black male teachers can conduct workshops and help review training proposals for cultural relevance.

Ivory A. Toldson, Ph.D., is a tenured associate professor at Howard University, senior research analyst for the Congressional Black Caucus Foundation, editor-in-chief of the Journal of Negro Education and contributing education editor at The Root. He can be contacted at itoldson@howard.edu.